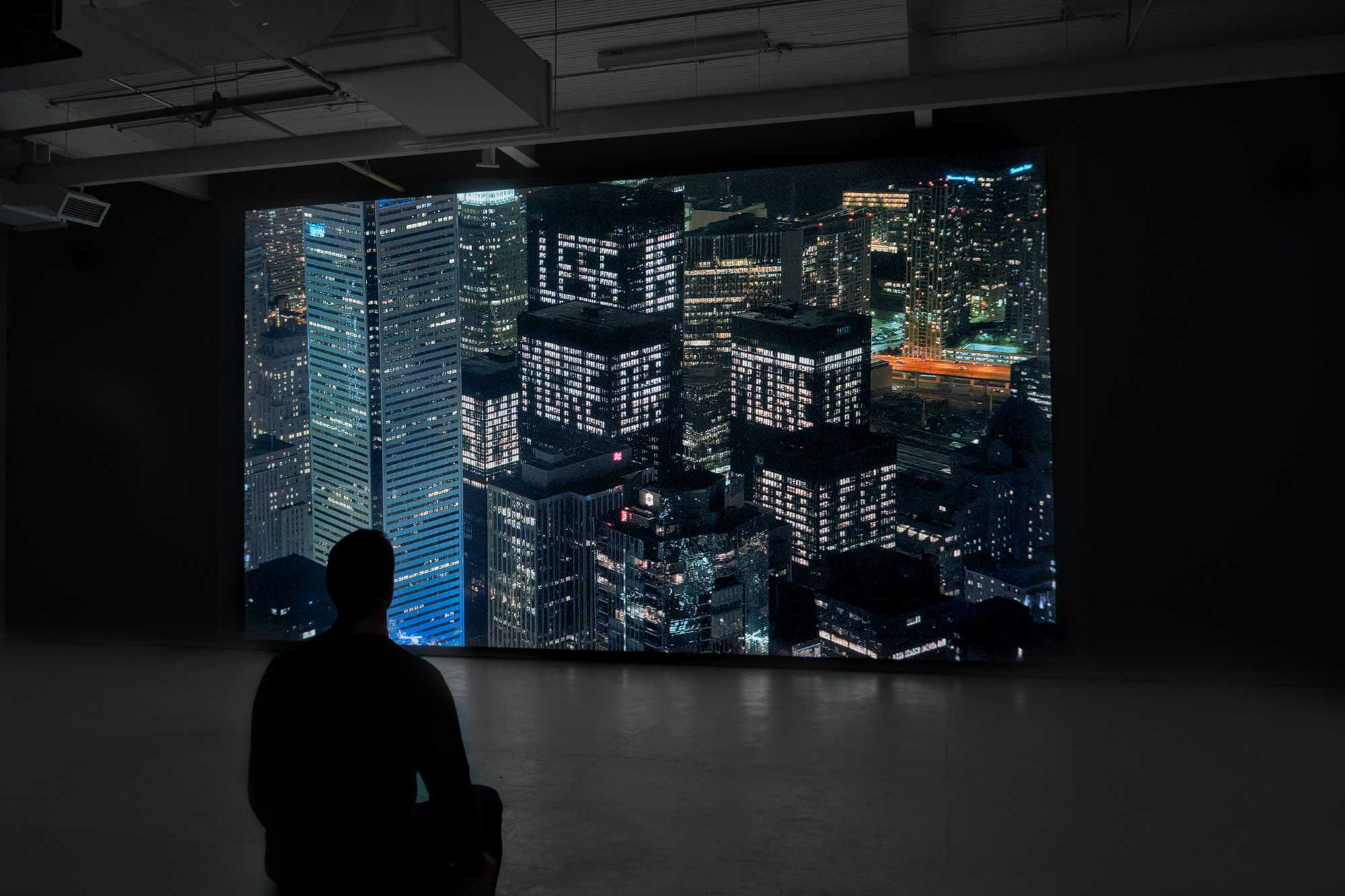 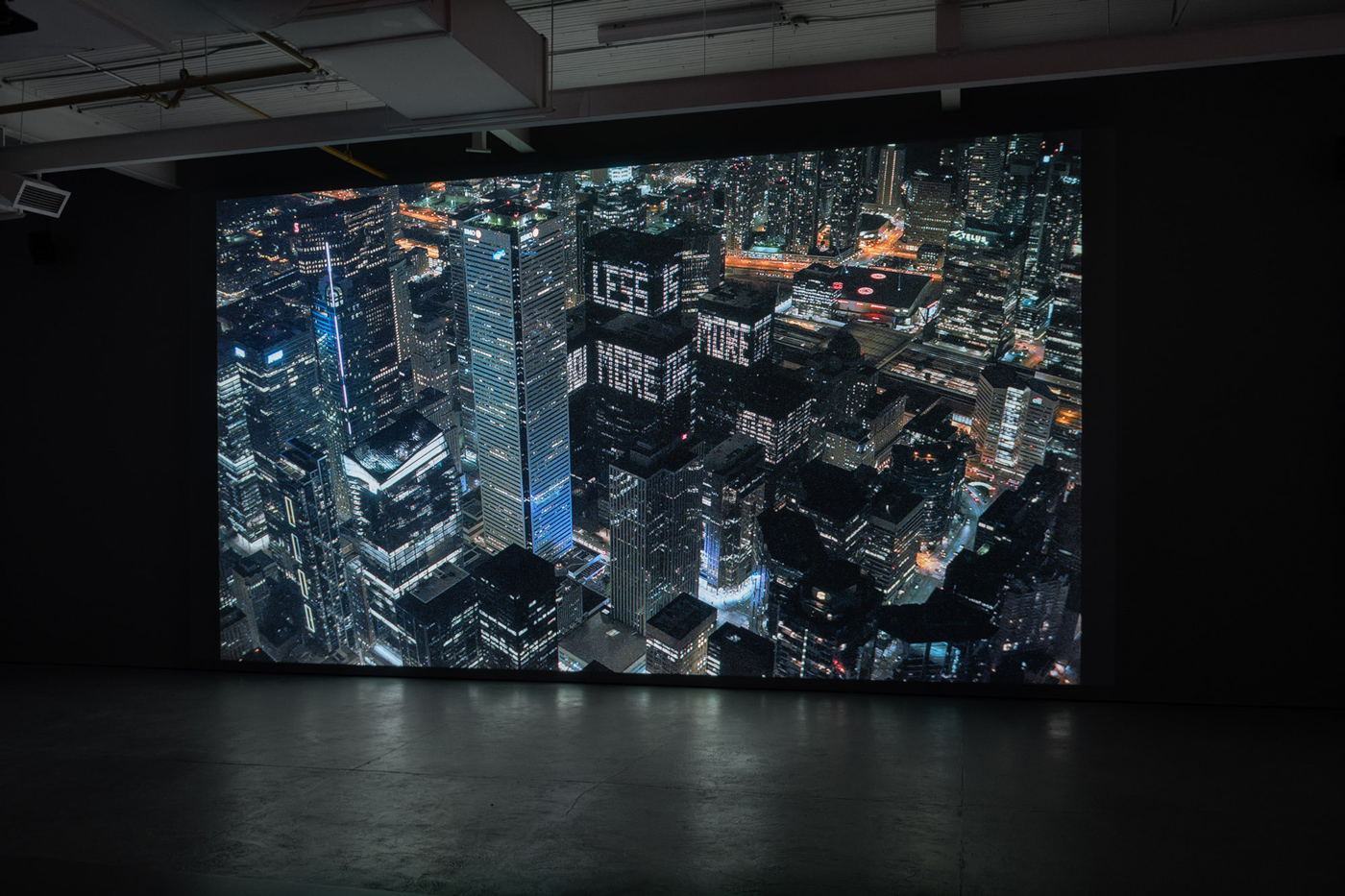 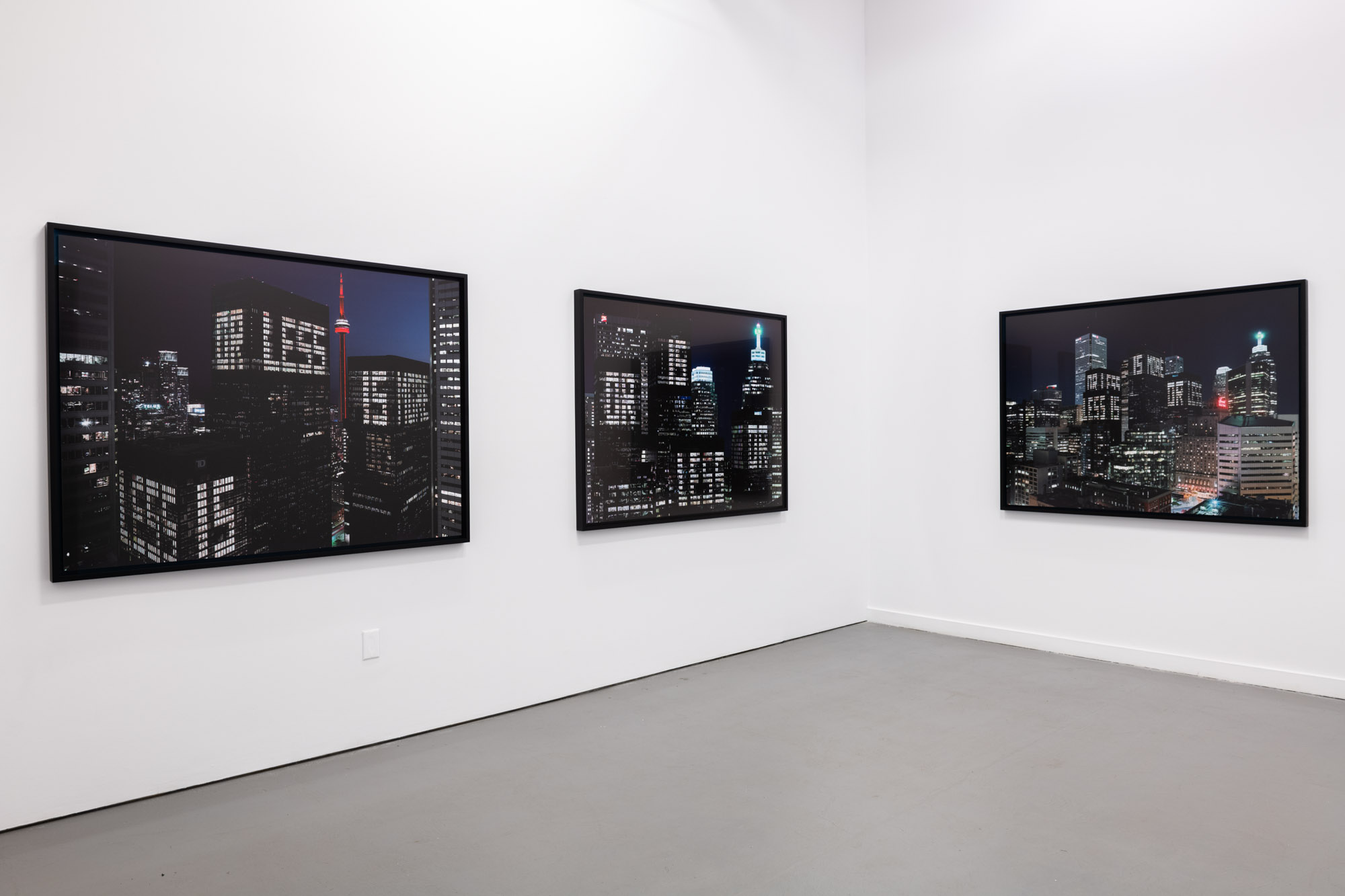 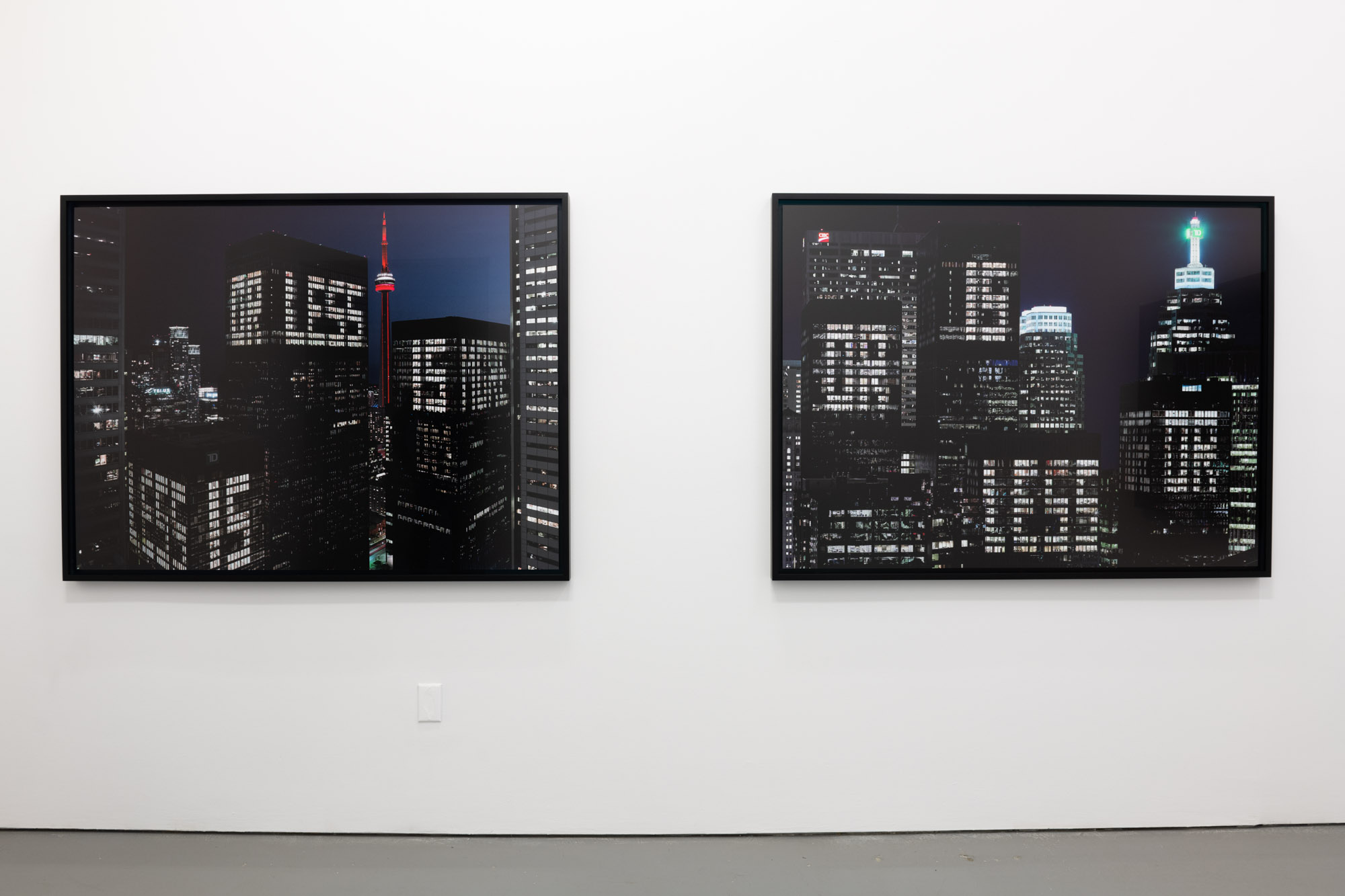 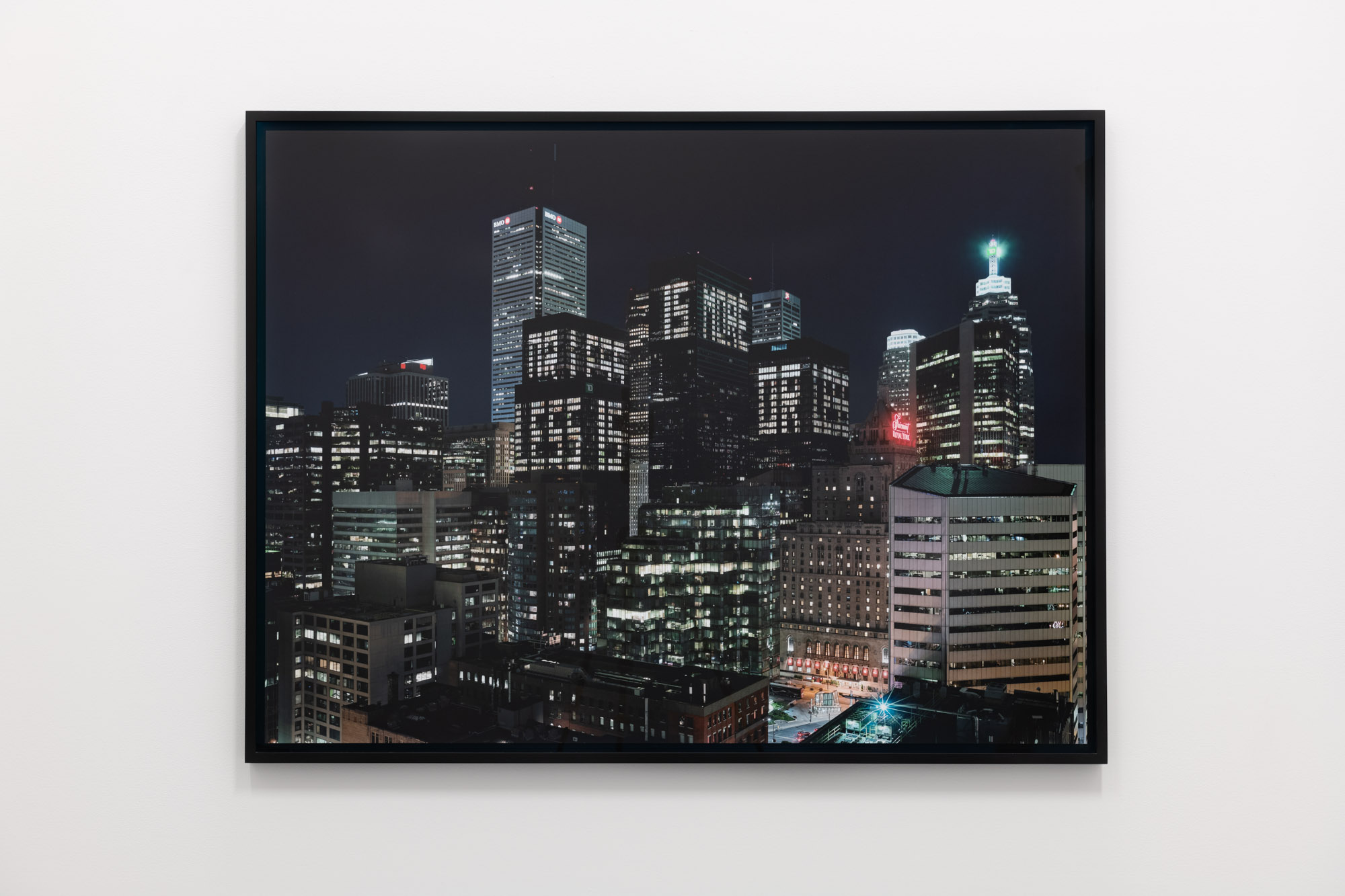 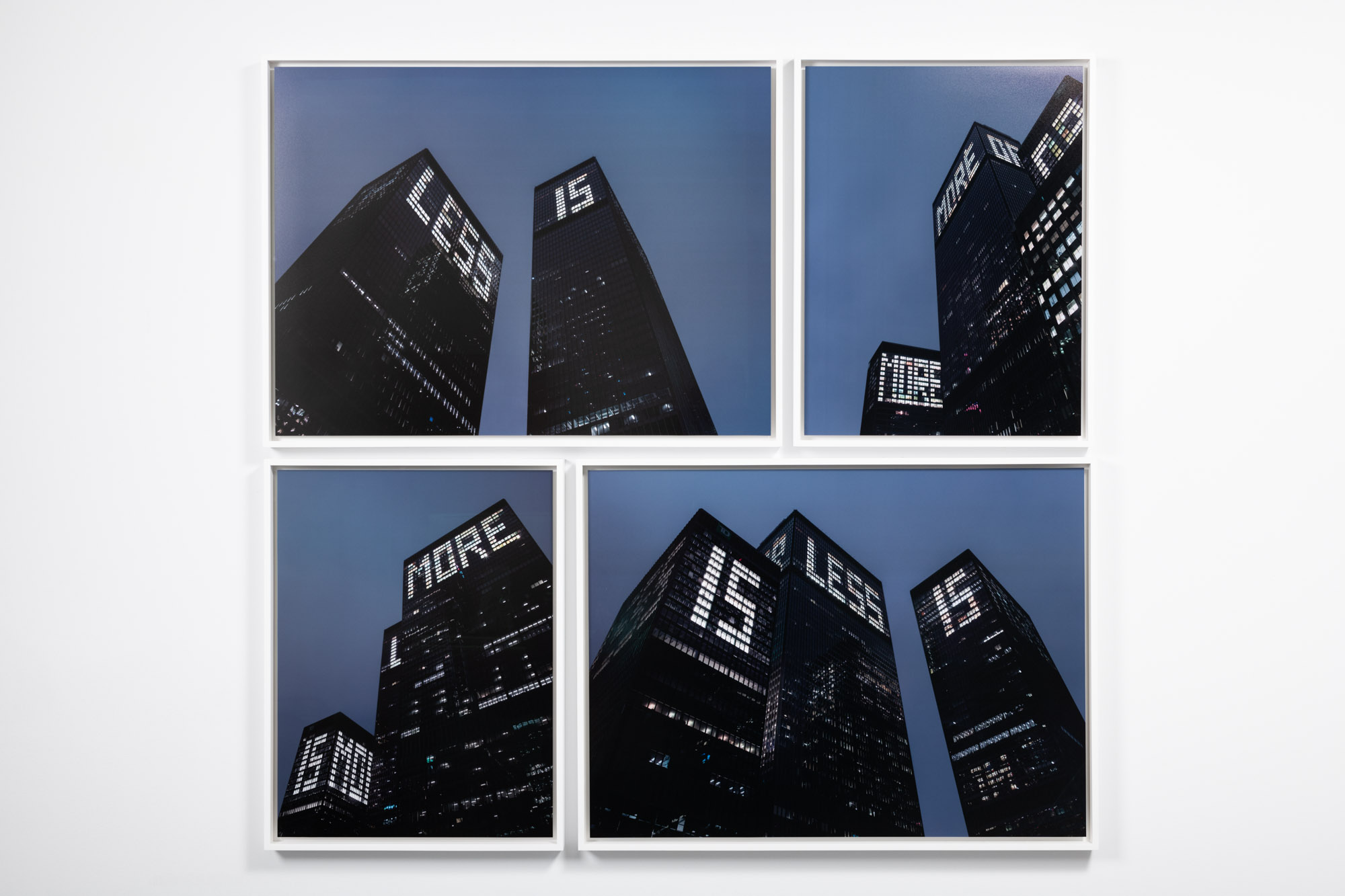 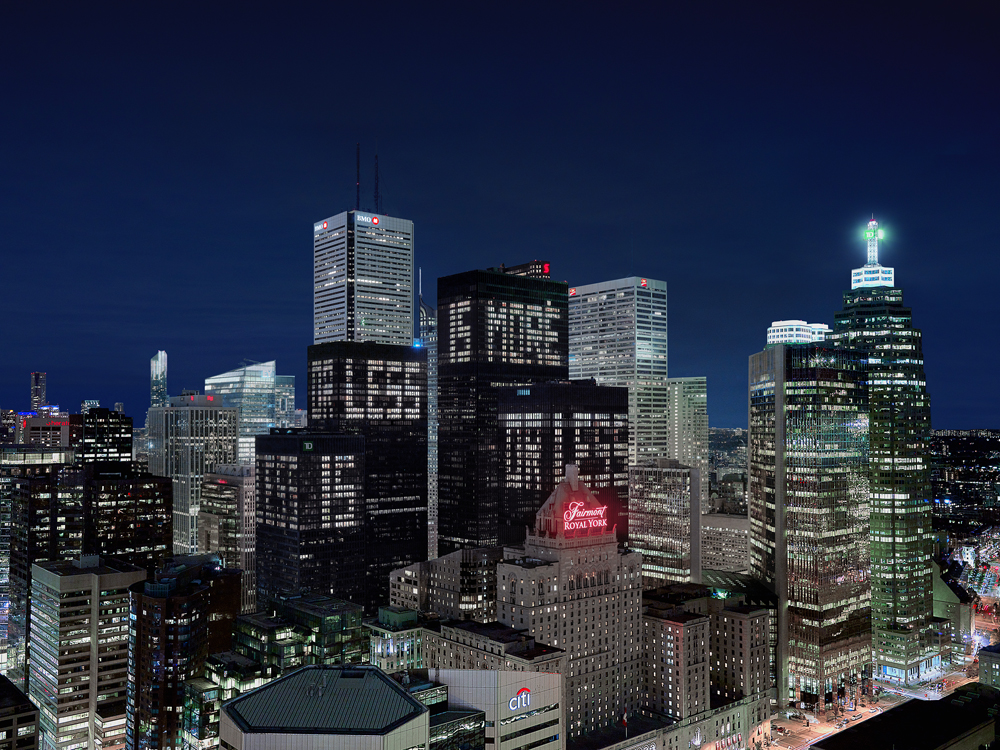 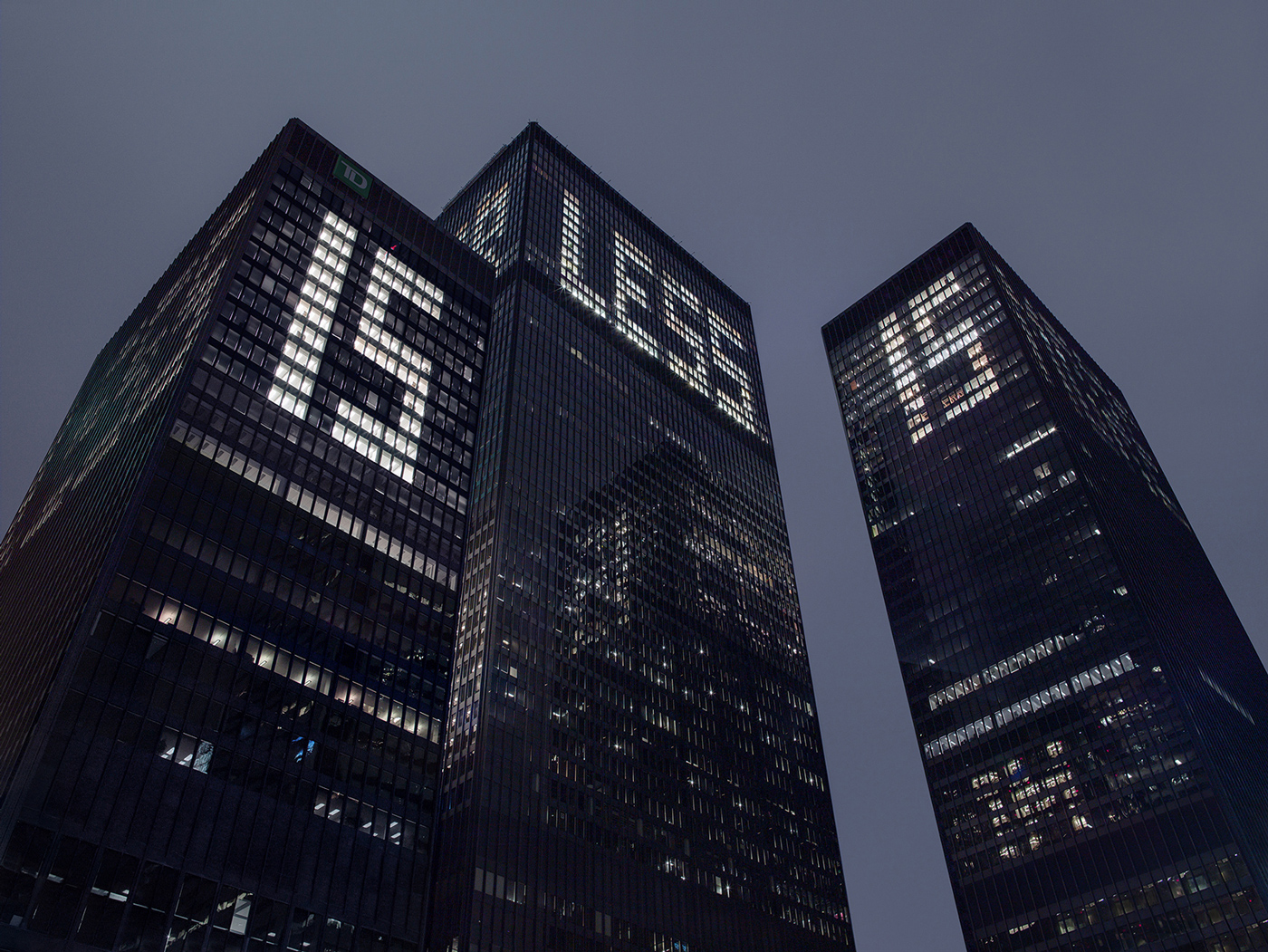 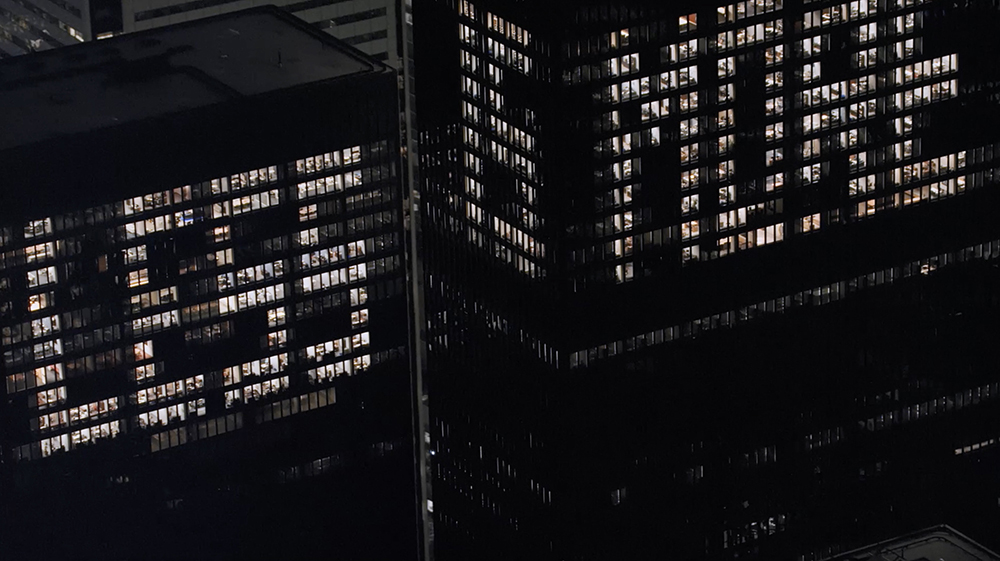 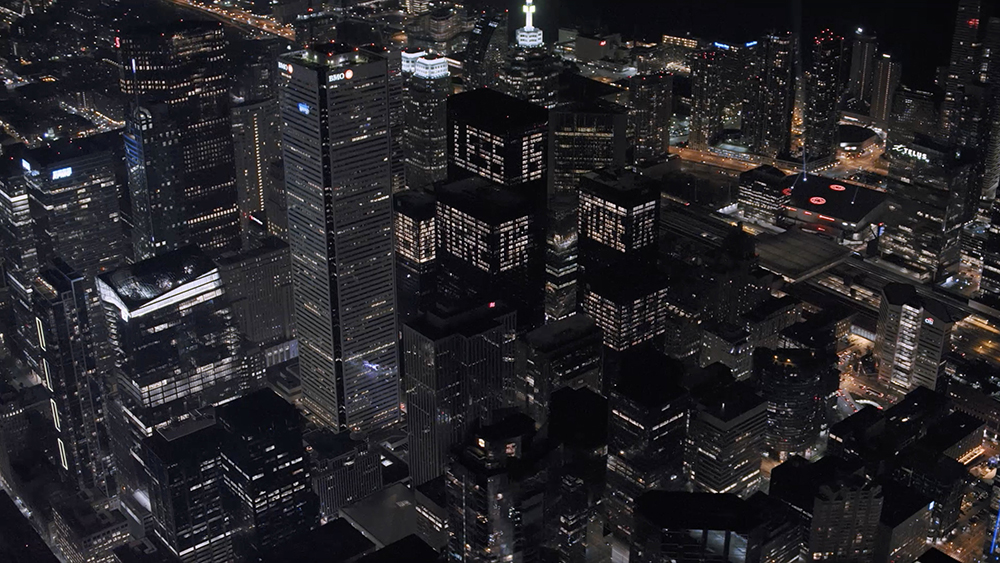 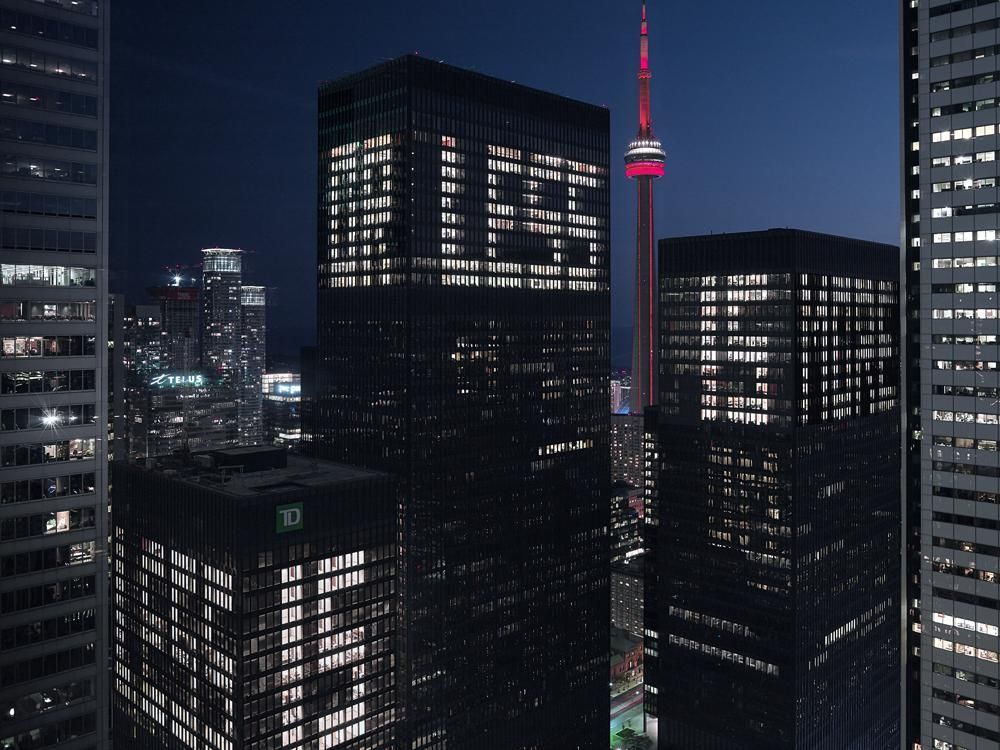 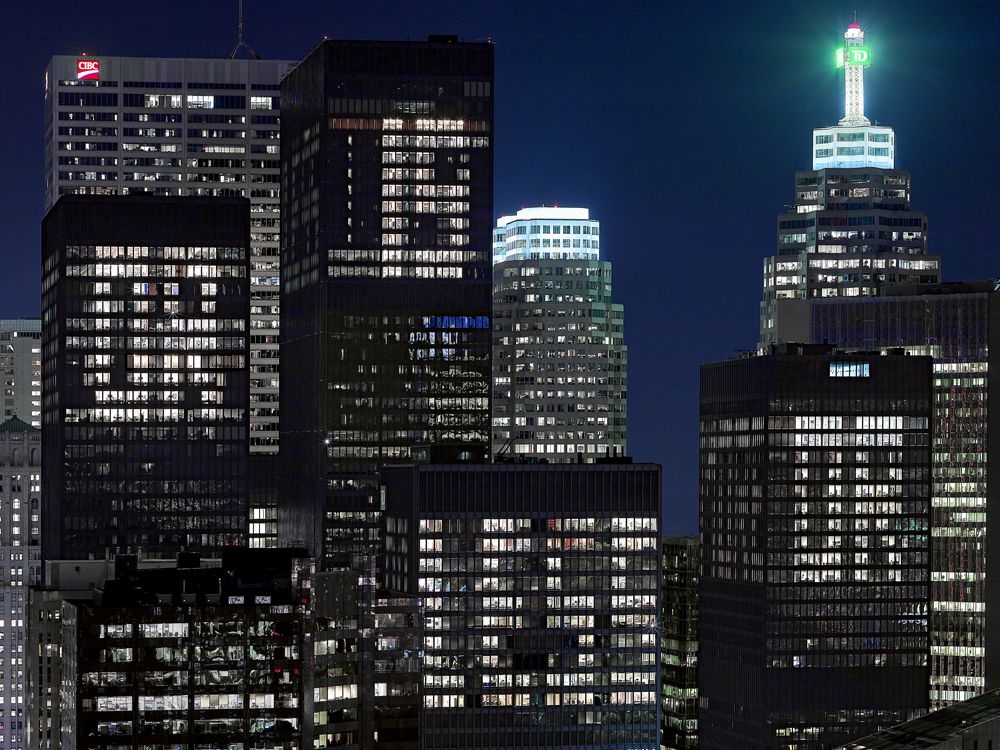 Galerie Antoine Ertaskiran is proud to present Less is More or, Aude Moreau’s latest solo exhibition. The project is the culmination of the site-specific intervention series the artist has been developing since 2010 in major cities across North America. The exhibition brings together a film presented in a large-scale projection and a series of photographs documenting the public intervention that took place at the Toronto-Dominion Centre in Toronto over three nights, from September 2 to September 4, 2017.

This eye-grabbing, large-scale installation utilized the already existing lighting system of the Toronto-Dominion Centre’s offices to compose “LESS IS MORE OR” on the towers’ facades. Designed by Ludwig Mies van der Rohe, these skyscrapers embody the German-American architect’s desire to get to the essence of form by exposing the structural frame of the building and eliminating any sort of ornamentation.

As a response to the Modernist movement, Aude Moreau’s project engages with architecture from within, by controlling the light projected onto the city from inside the buildings. By reshaping the city’s skyline, the artist highlights the way these iconic buildings participate in the endless spectacle of an evolving cityscape. At nightfall, the reorganization of the skyscrapers’ lights into the words “LESS IS MORE OR” creates meaning out of the otherwise arbitrary, chaotic lighting of the city.

Aude Moreau’s reassessment of Mies van der Rohe’s work and his famous credo invites viewers to reconsider their approach to the concepts of openness and transparency as emancipatory values ​​inherited from modernity. The addition of “OR” opens up the statement “less is more” to new possibilities of interpretation, referencing the multitude of contingent discourses that shape our present era. The exhibition explores the links between history and the present; economy and geography; architecture and the city.

Aude Moreau (born 1969) works and lives in Montreal. She graduated in 1992 from Université Paris VIII in visual arts before settling in Quebec in 1995 to pursue her studies in scenography. She then developed a body of work combining her skills in both scenography and visual arts. She has presented her work in Canada and abroad at events such as the Prague Biennale (2011) and Montreal’s Nuit Blanche (2010). Aude Moreau’s work has been exhibited in many prestigious institutions, including the Musée d’art contemporain de Montréal (2017), the Casino du Luxembourg (2016), the Power Plant (Toronto, 2016), the Centre culturel canadien (Paris, 2015), the Galerie de l’UQAM (2015) and the Fonderie Darling (Montreal, 2008). He works can be found in numerous public and private collections. She has received several awards, such as the Prix Louis Comtois (2016), the Bourse Claudine et Stephen Bronfman en art contemporain (Montreal, 2011) and the Powerhouse Prize from La Centrale (Montreal, 2011).

The artist wishes to thank Le Conseil des arts et des lettres du Québec for its financial support, as well as all contributors to the project especially TD Bank and Cadillac Fairview.

For video excerpt of Less is More or, click here.