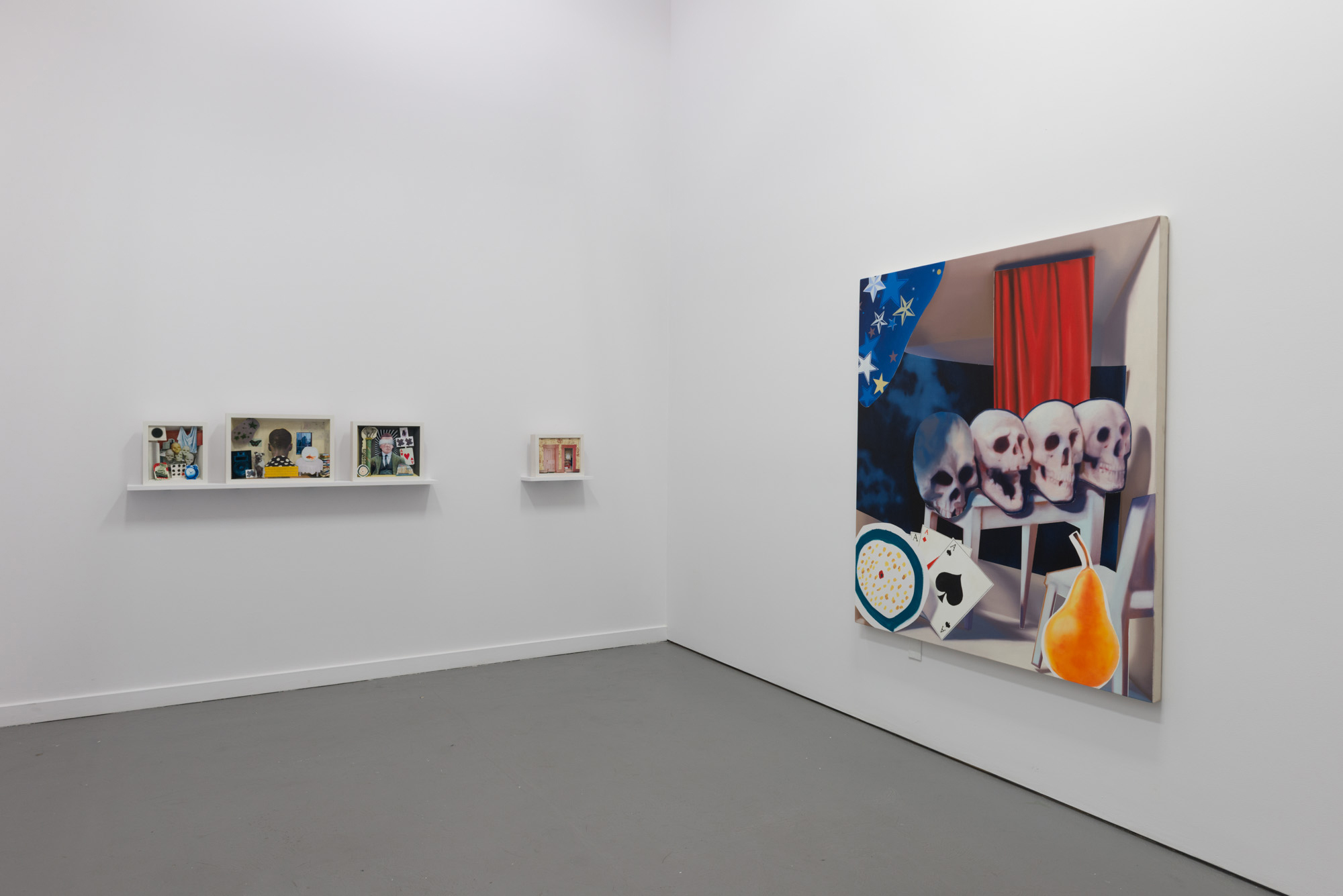 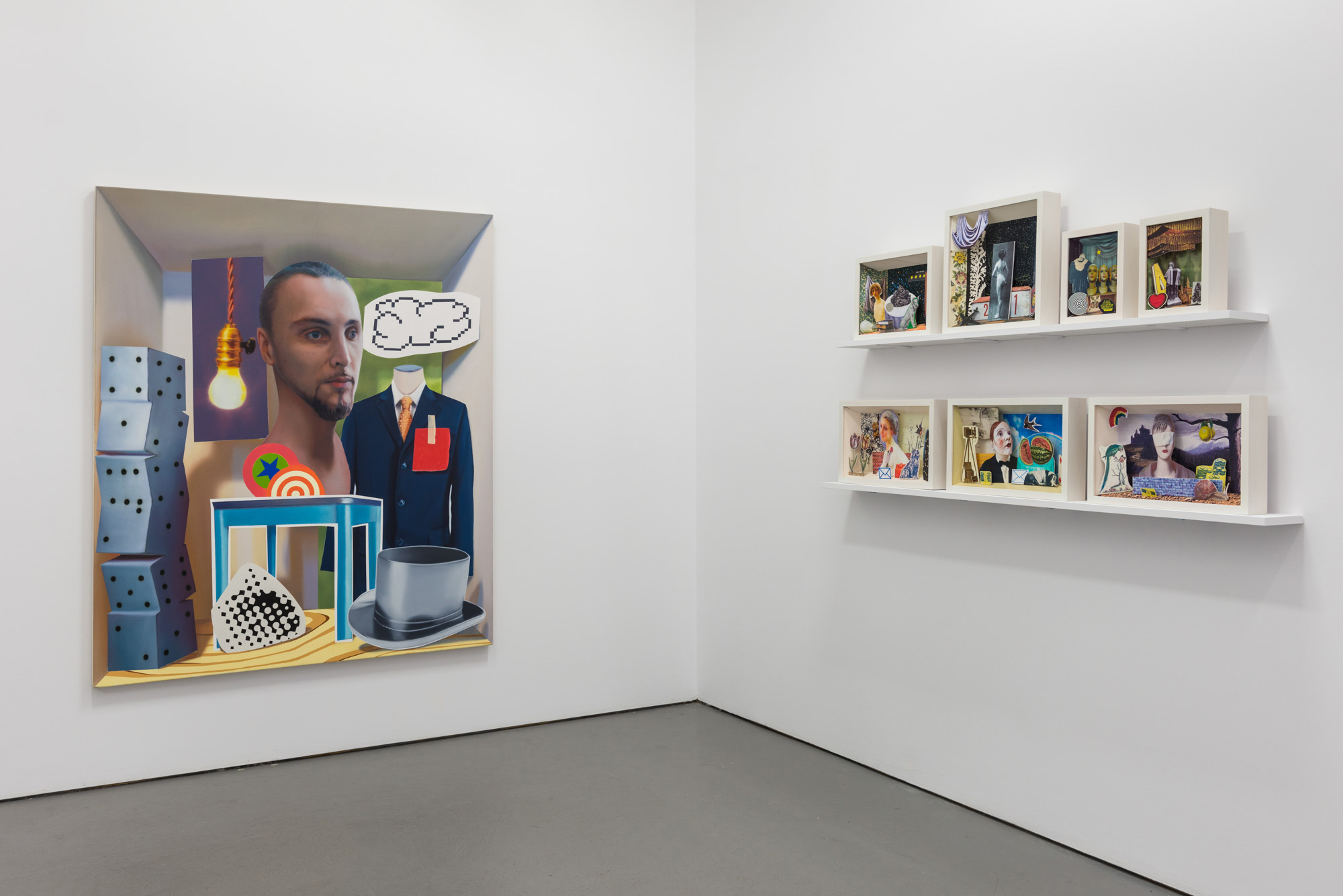 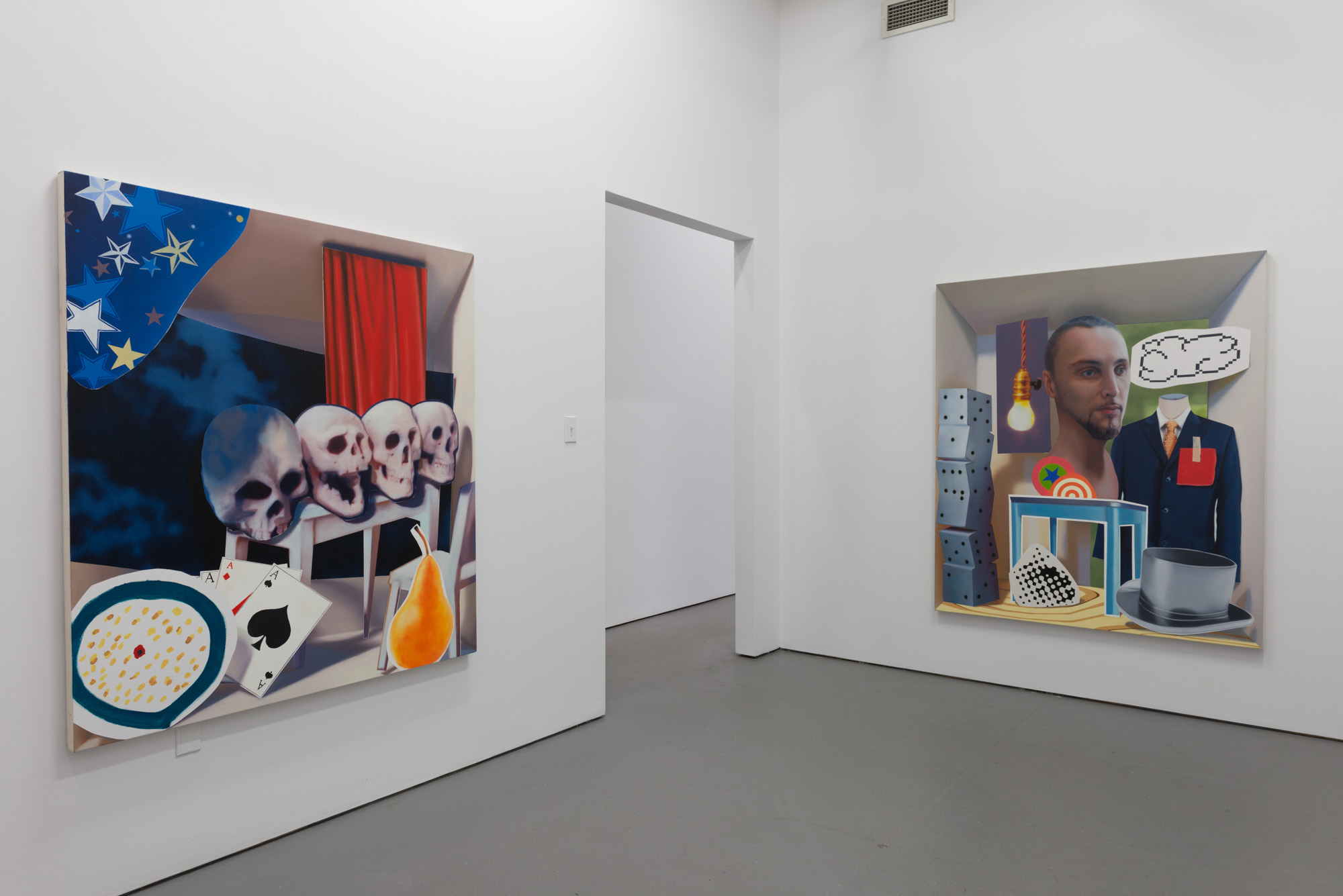 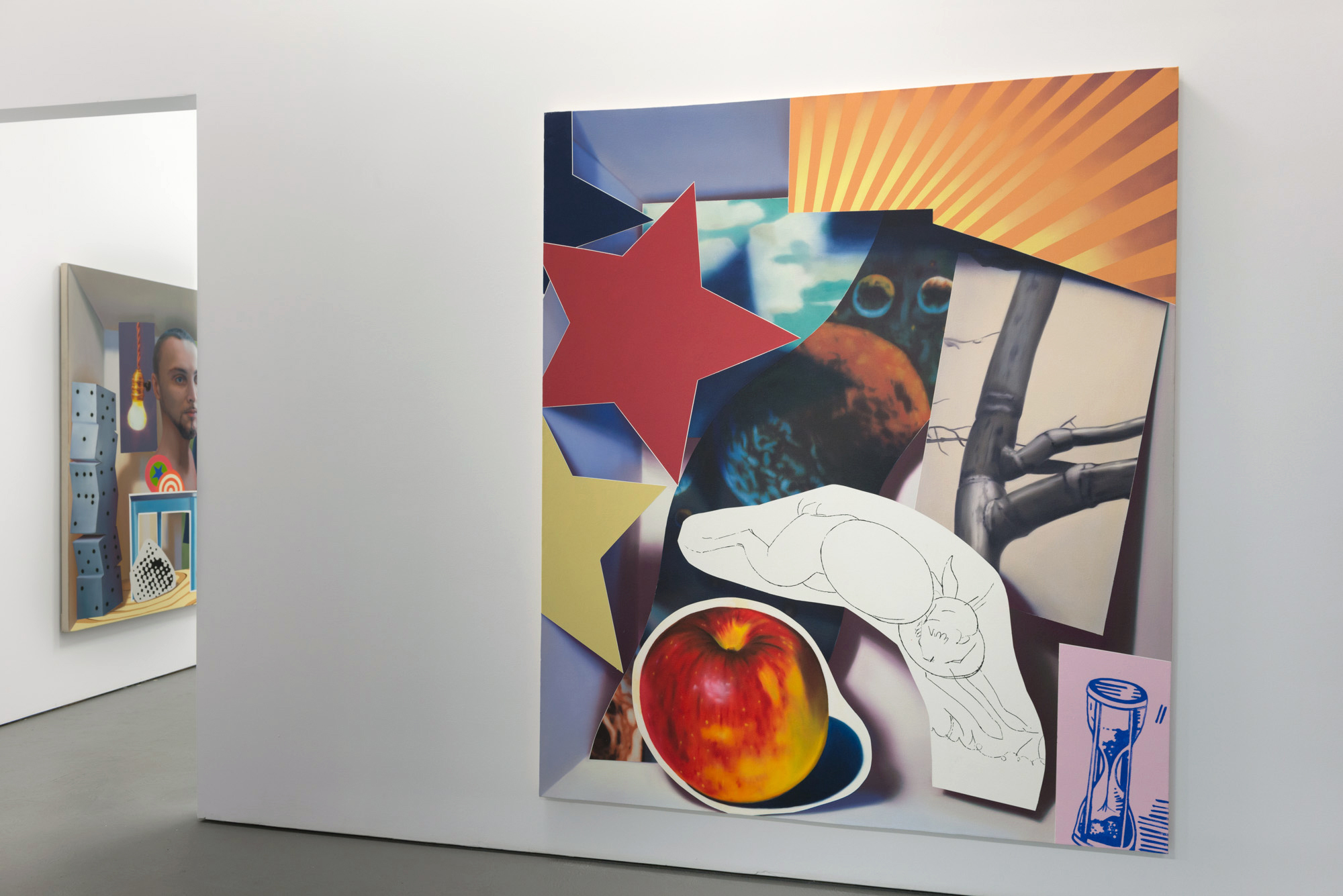 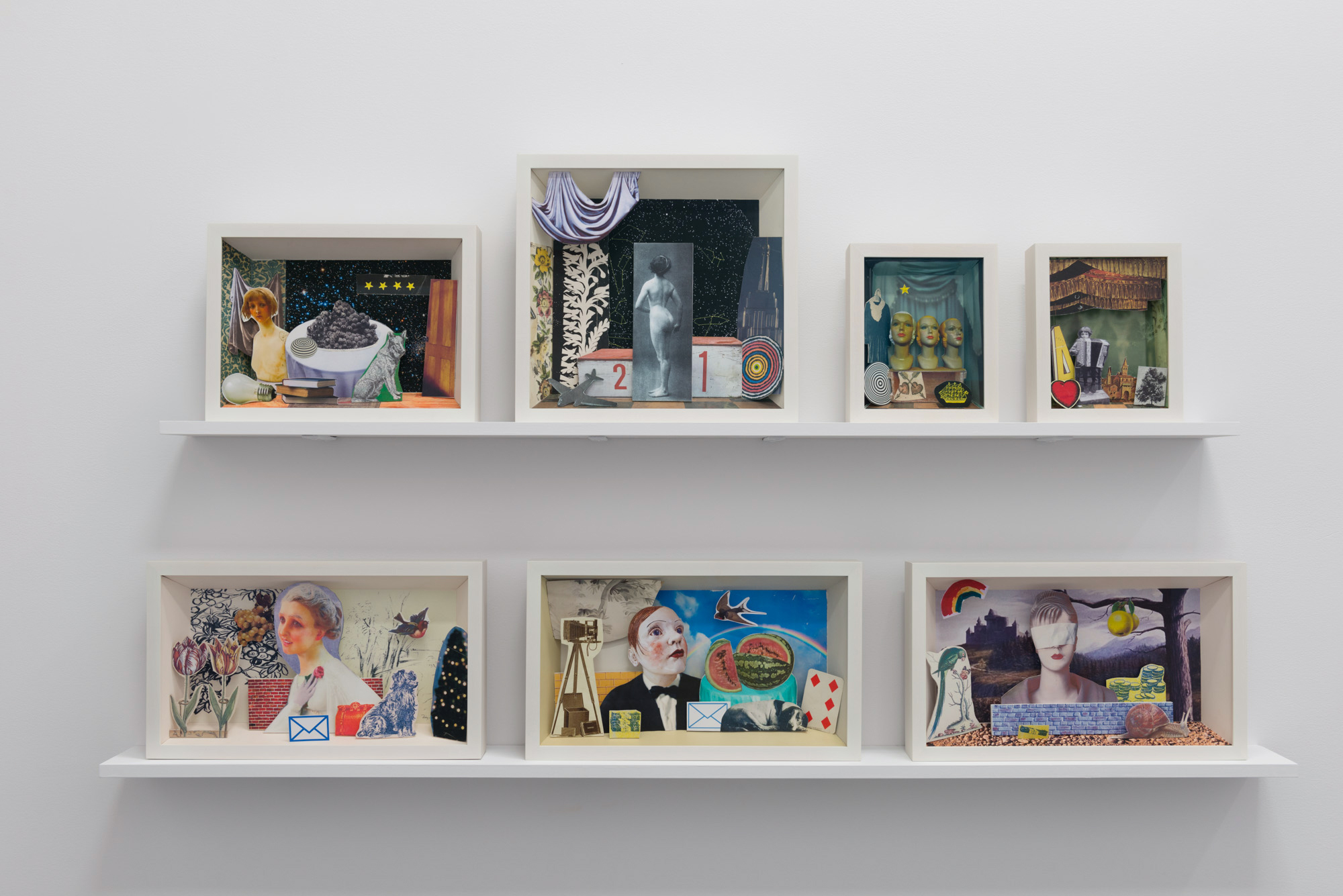 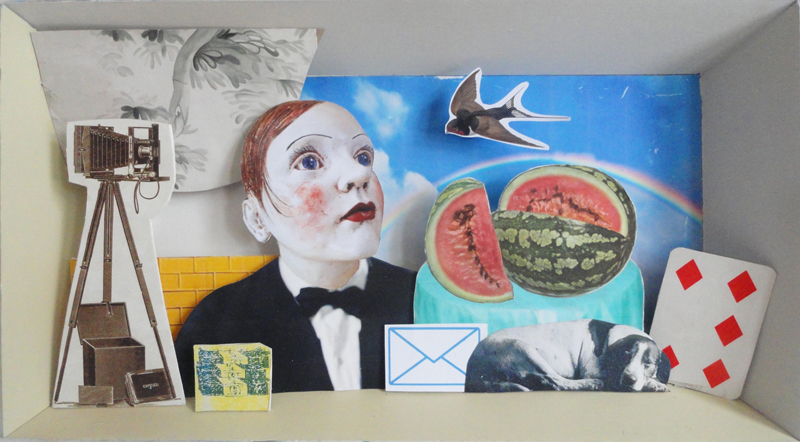 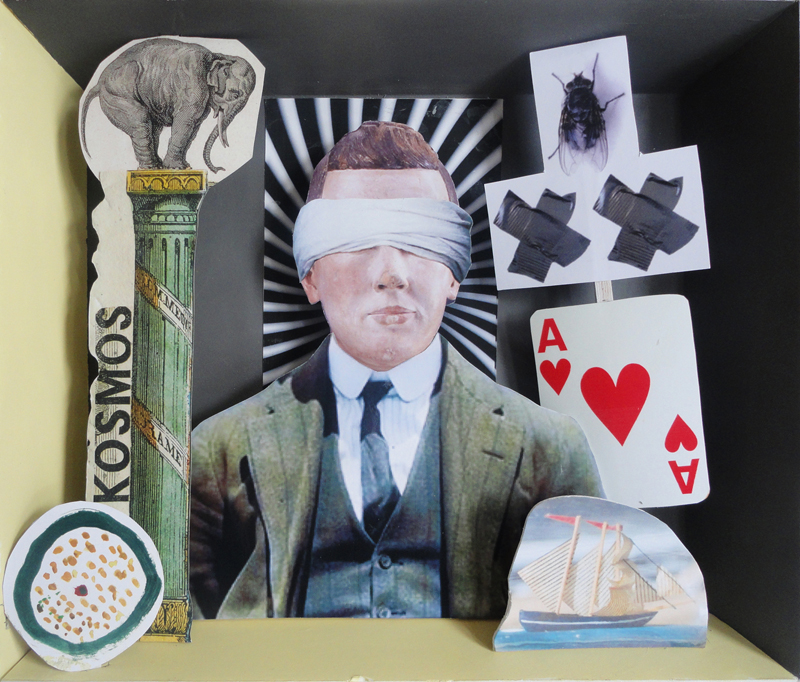 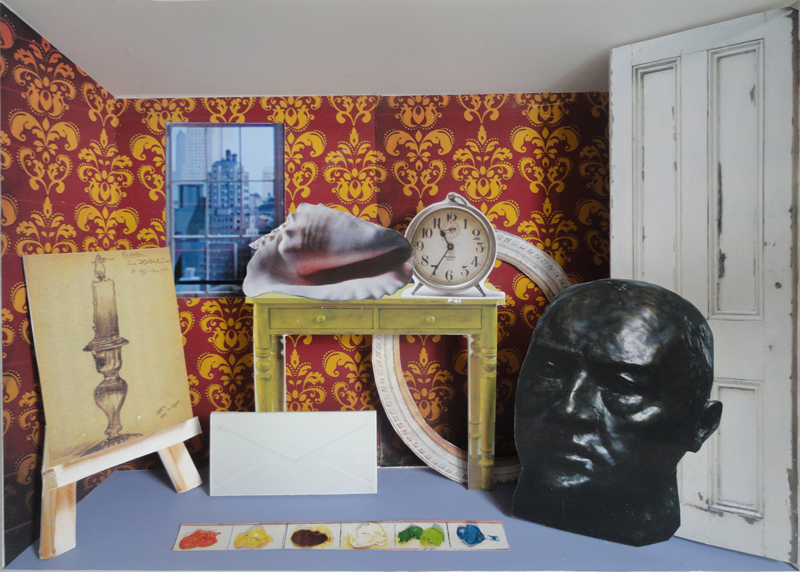 Galerie Antoine Ertaskiran is pleased to announce a new collaboration with David Elliott with a new exhibition entitled Million Dollar Bash featuring a series of large-scale paintings and recent collages to be held in the gallery’s second exhibition room.

One of the principal Canadian painters associated with the late seventies and early eighties return to figuration, Elliott is a self- prescribed postmodern collagist with strong affinities for nineteenth-century symbolism and twentieth-century metaphysical painting. Elliott chooses and arranges images with both rigor and vitality that serve to evoke feelings of Romanticism from ages past. For Elliott, the deliberate choosing of imagery is just as important as the way in which said images are arranged on the canvas. Inspired by such works as the assemblage pieces of American artist Joseph Cornell and the counterculture aesthetic of the 1960’s and 70’s, David Elliott sees the world in pieces, and in turn desires to patch together its various elements as one onto the canvas – a space that he once referred to as his “metaphysical spatial container.”

Elliott’s imagery is characterized by its exuberance and surprising juxtapositions. Throughout his career, collage has served as the point of departure for his large, brightly coloured canvases. Since 2006, his collage studies have evolved into 3-dimensional maquettes and miniature paper and cardboard theatres – all full of rich poetic resonance. In Million Dollar Bash, Elliott balances innocence with a sense of dread in a series of vignettes that evoke earlier spirits of silent cinema and early recorded popular music, yet simultaneously serve as testimonials to our own complicated times. Most of these collage boxes were done this past winter, with figures rather than still life still dominating the frame. While David Elliott’s earlier collages both compressed and combined various sources to create a mobile, unknowable sense of time and place, we now see distinct late 19th and early 20th century imagery in his work. Men and women appear as early venture capitalists, debutantes, burlesque performers, or silent film stars. These small scenes in turn serve to approach that same theatrical balance between innocence and calamity that renders early cinema and early-recorded music so compelling. Million Dollar Bash, in reference to a Dylan & the Band’s 1967 song of the same title, is a good metaphor for what Elliott is seeking in his work; a place full of excitement, promise, and dread – even if we are sitting alone in our room. It’s that on-going circus that shuffles around inside our head and we can never be sure if it is real or a dream.

David Elliott was born in 1953 in Niagara-on-the-Lake. He has lived and worked in Montreal since 1977. Elliott has exhibited both nationally and internationally for over 35 years. In 1993, the Museo de Arte Moderno in Mexico City organized David Elliott: Pintura, a retrospective of his work. More recent overviews include Instant Karma at the Saidye Bronfman Center for the Arts (2002) and La Chambre enchantée at the Musée Régional de Rimouski (2012). His professional accomplishments have been acknowledged in David Burnett’s Contemporary Canadian Art and Robert Bernier’s La peinture au Québec depuis les années 1960. His large-scale canvases are included in the collections of the Montreal Museum of Fine Arts, Musée d’art contemporain de Montréal, Musée national des beaux-arts du Québec and the Art Gallery of Nova Scotia as well as corporative collections such as Hydro-Québec, Caisse de dépôt et placement du Québec and Loto-Québec.