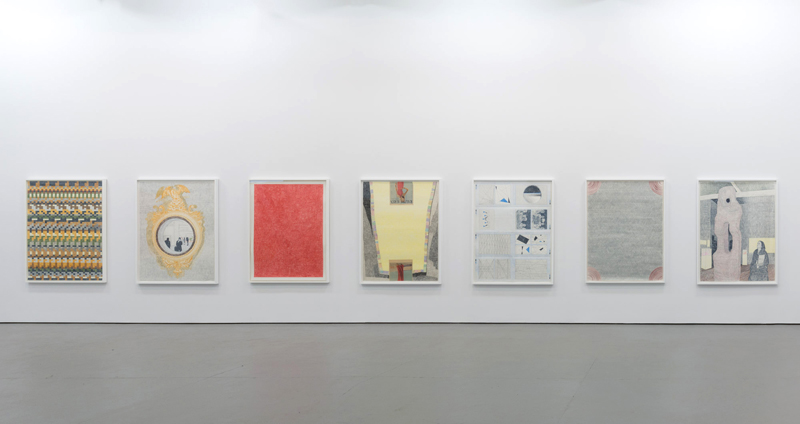 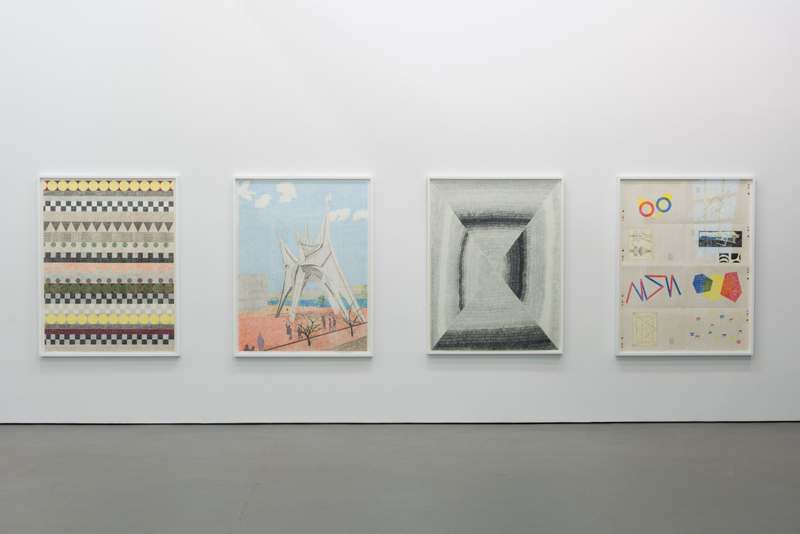 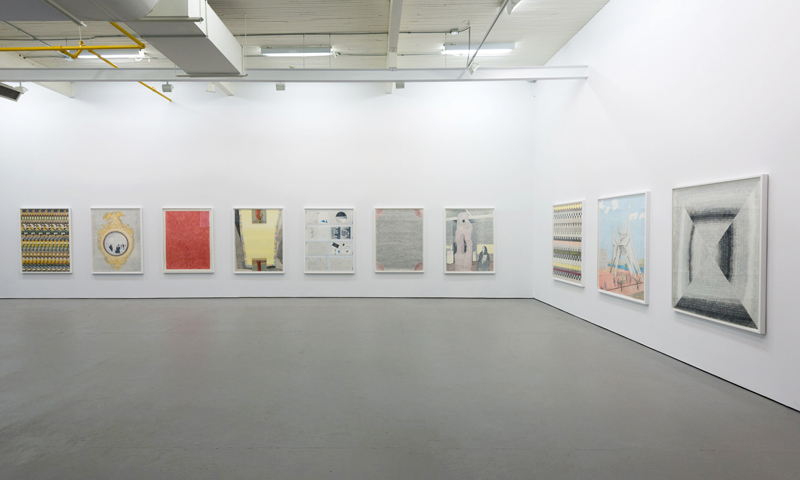 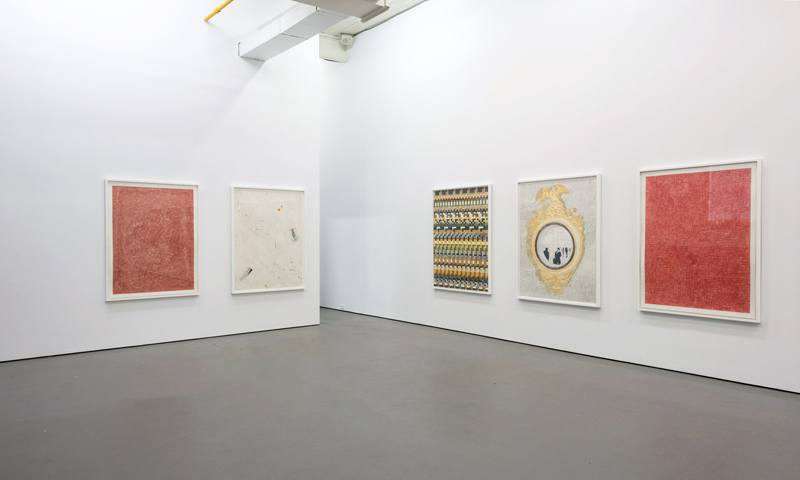 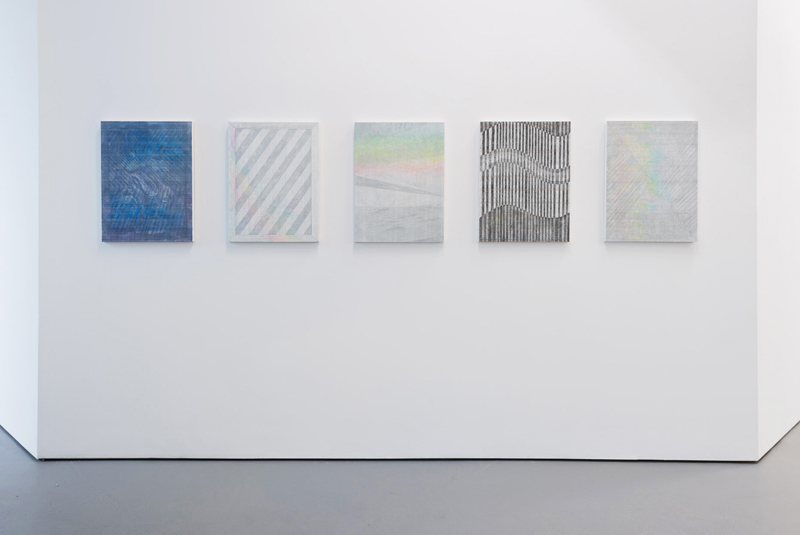 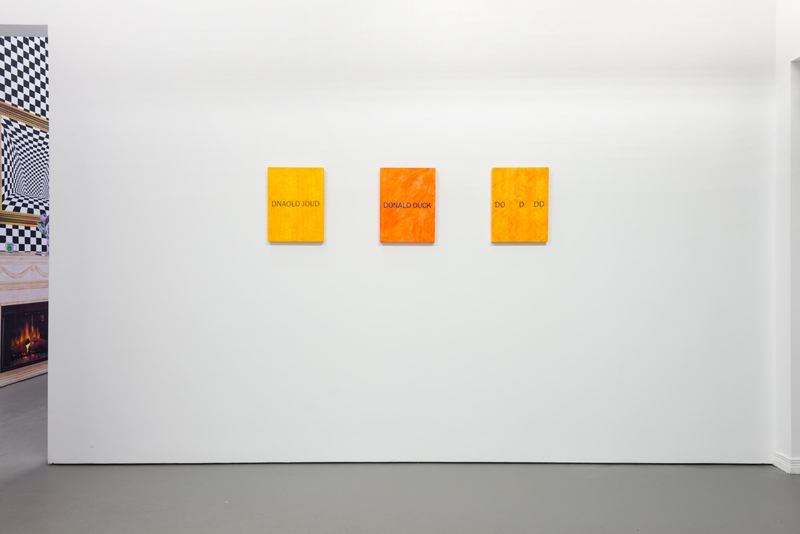 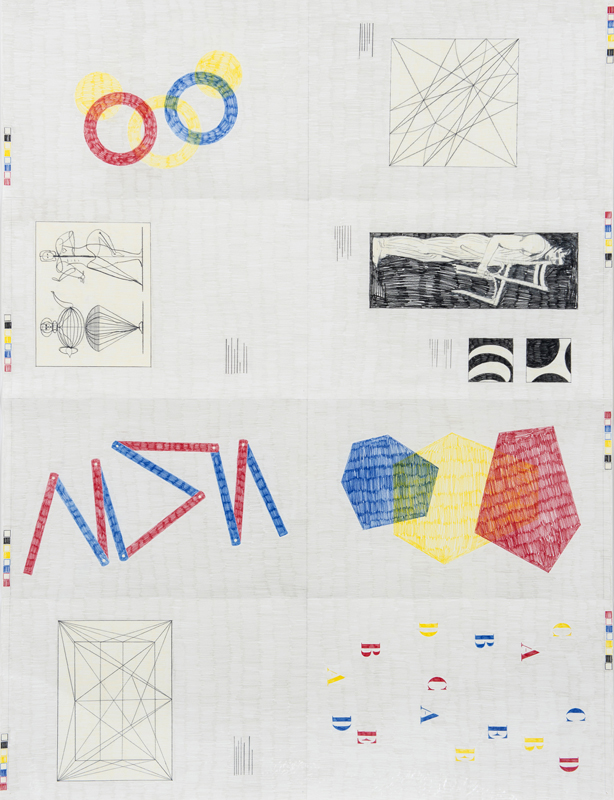 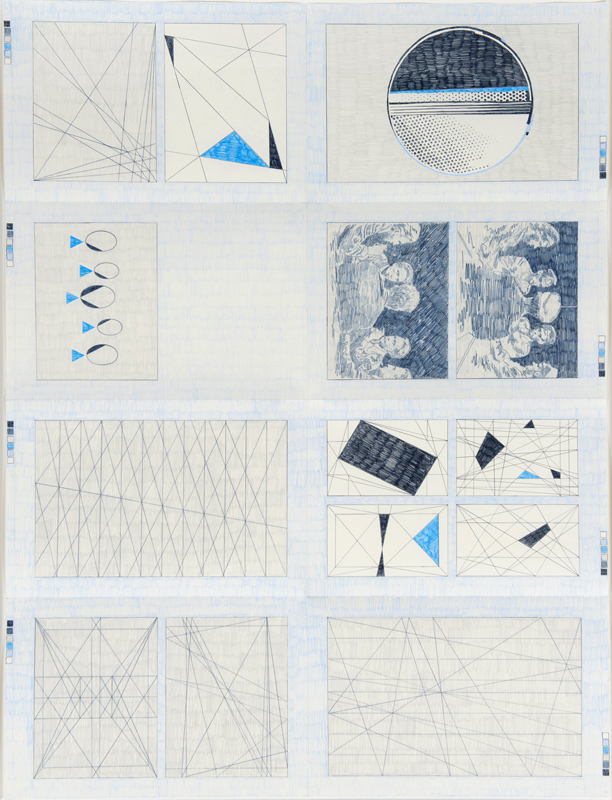 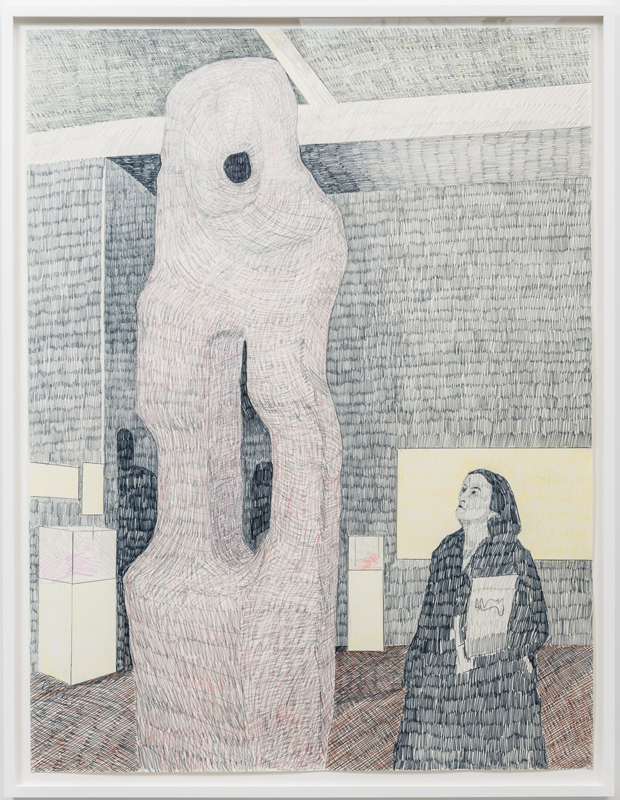 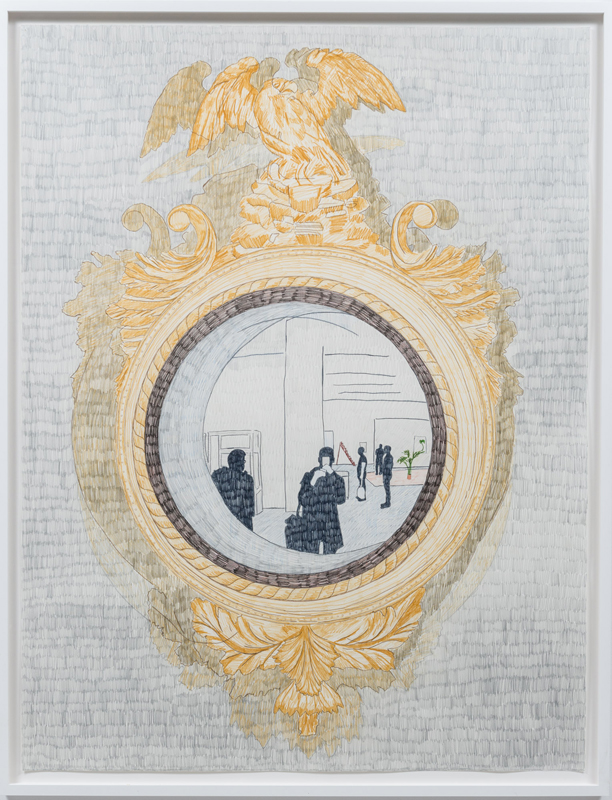 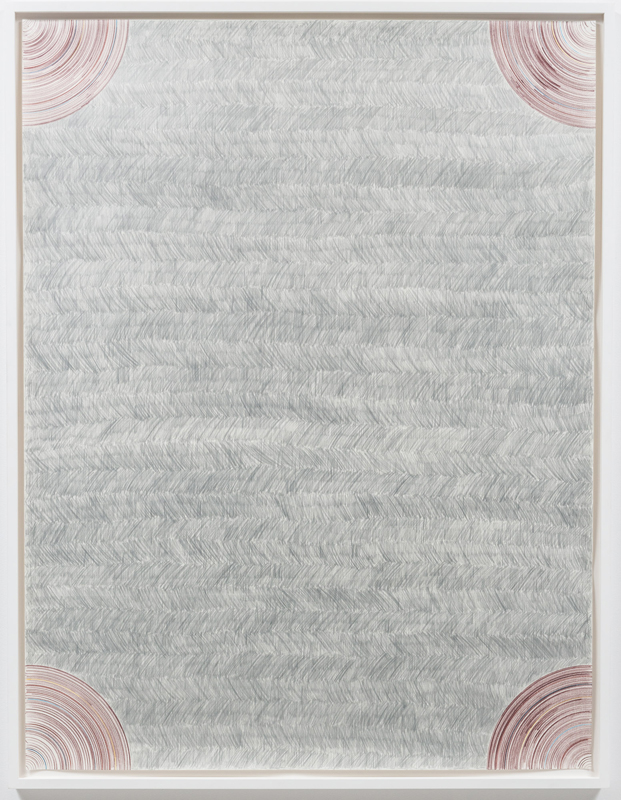 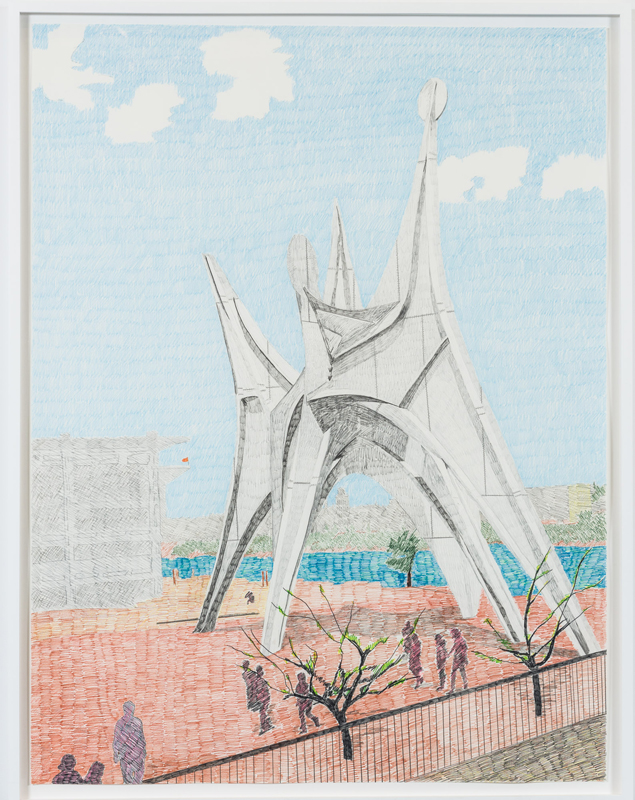 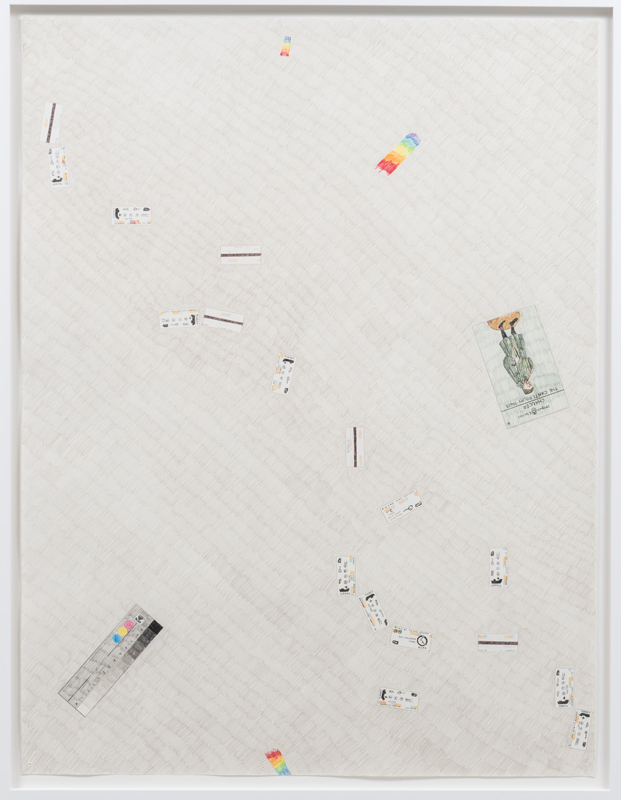 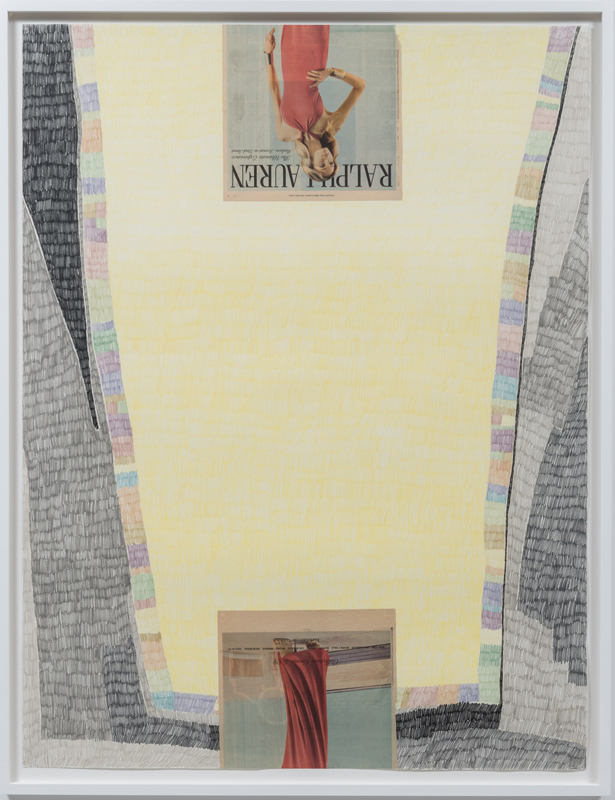 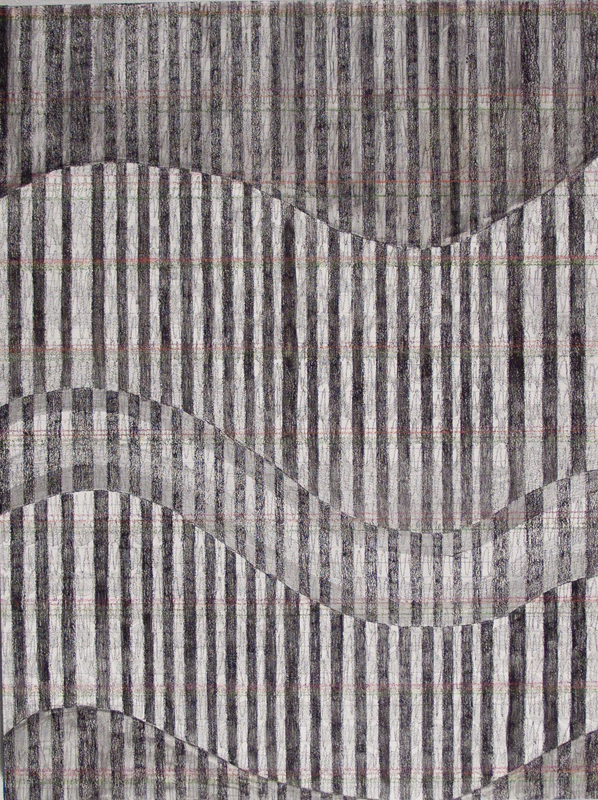 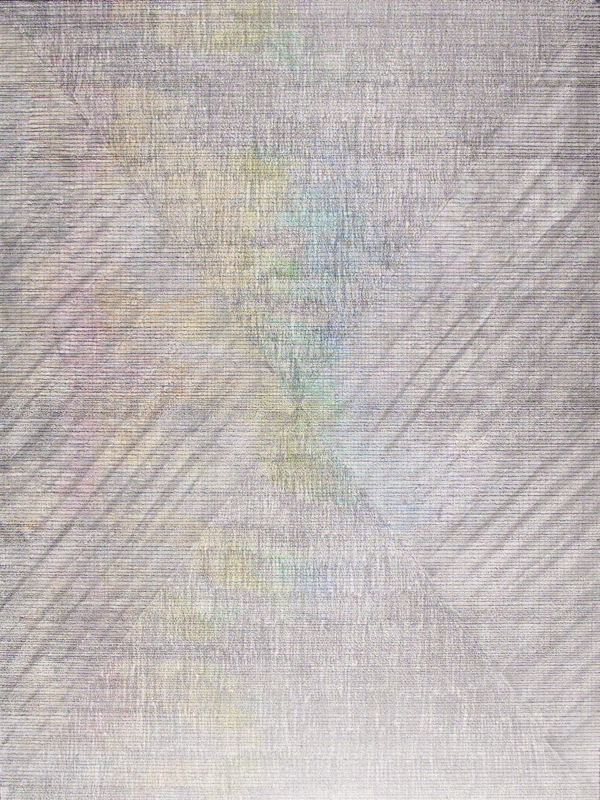 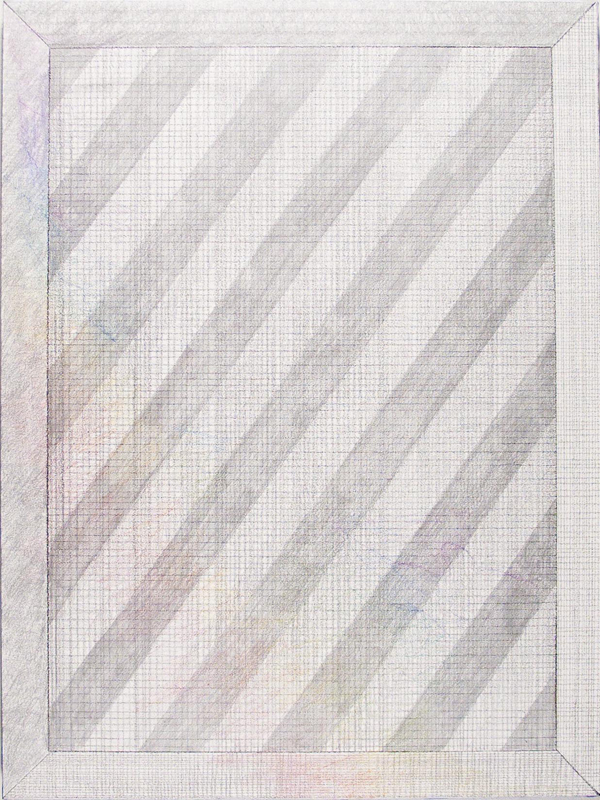 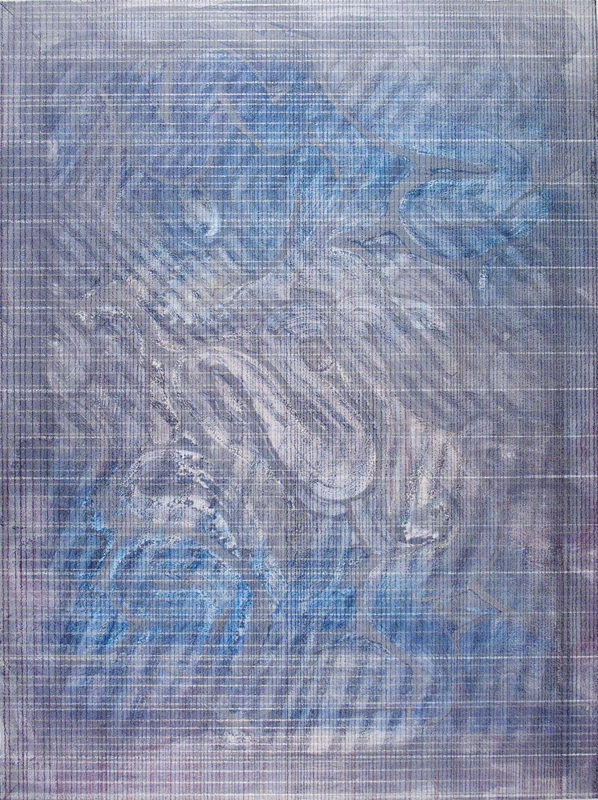 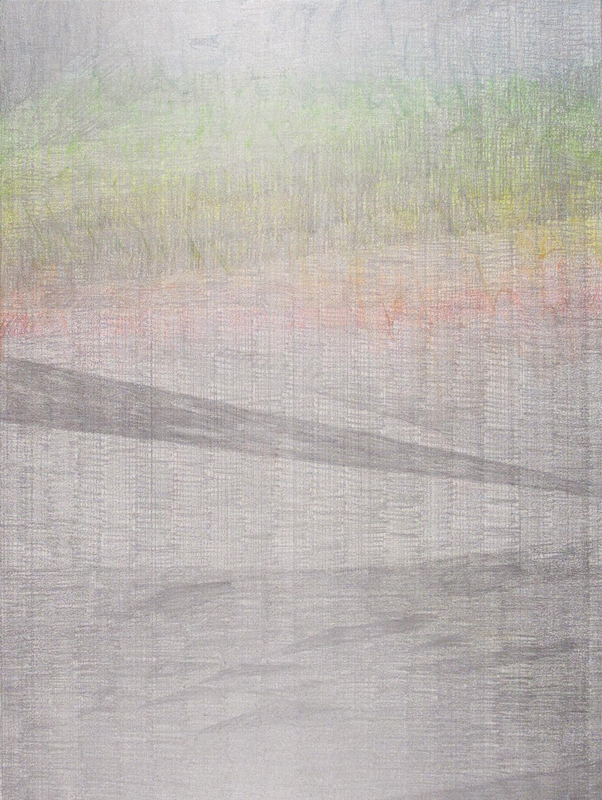 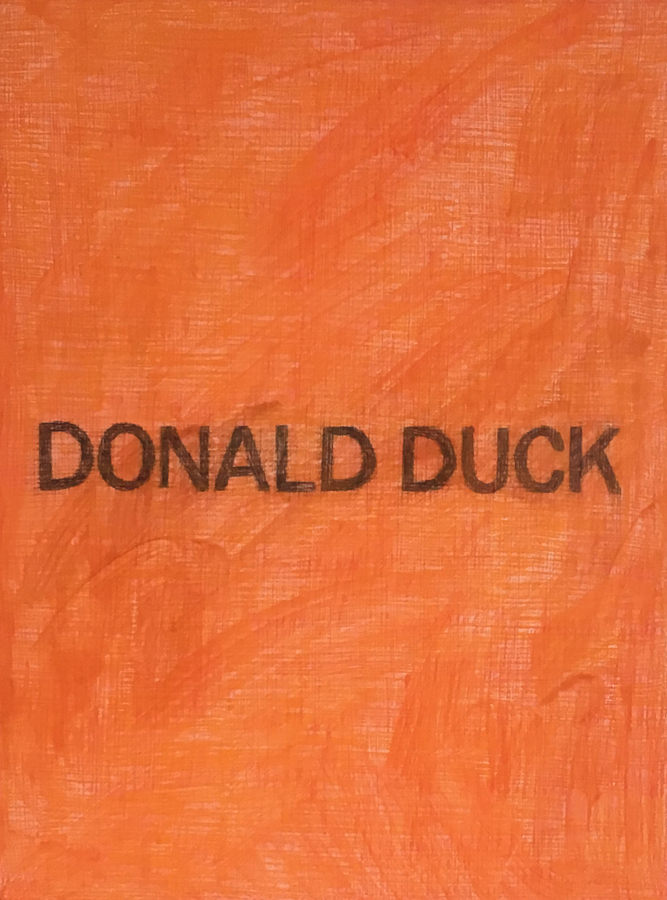 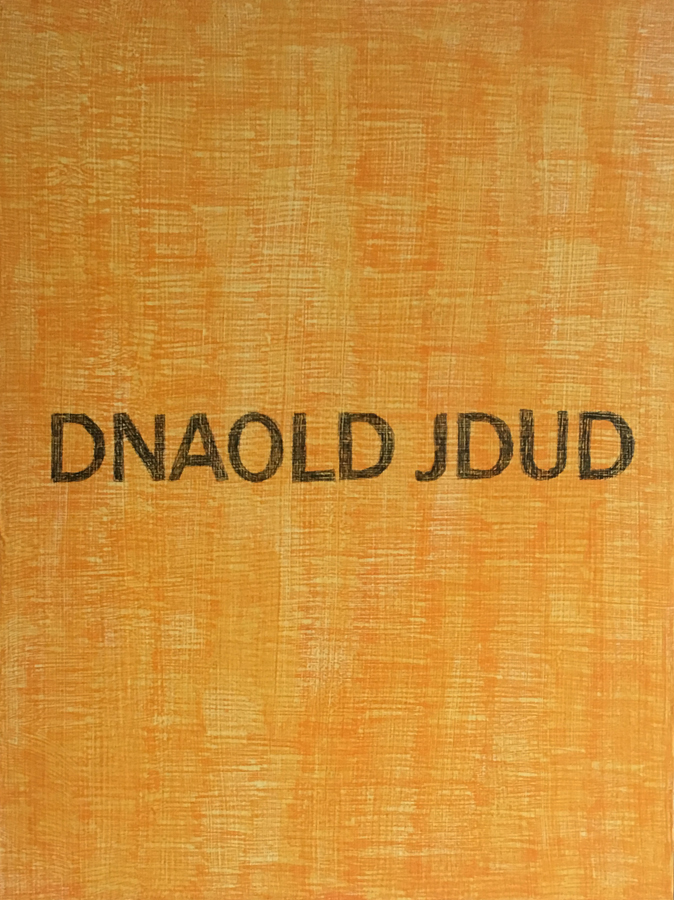 Galerie Antoine Ertaskiran is pleased to present Several Things Happening at the Same Time, Derek Sullivan‘s first solo exhibition with the gallery. The exhibition brings together three bodies of work, the Poster Drawing series, the National Gallery Catalogues series and the Mirrors series, exploring the place of drawing within Sullivan’s practice.

Central to the show is Sullivan’s Poster Drawing series. Ongoing since 2005, the Poster Drawings are uniformly formatted works on paper. Akin to promotional posters found in public transport or on bedroom walls, the works use the changing rhythm of advertising as a structure for an exploration of high and low cultural vernaculars. The works vary between monochromatic geometric abstractions, repeating patterning that recalls late modernist art and graphic design, figurative allusions, and drawn and folded book signatures. Conflating an eclectic and highly personal range of references, each drawing is executed with the same idiosyncratic gestural mark making that imbues these works with a naïve, yet meticulous aesthetic. Including new work alongside drawings from the past 6 years, this will be the largest presentation to date of this series.

Sullivan repeatedly turns to the book as a site of reference, image, and production in his work. This interest is continued here with a series of drawings that use as their starting point the cover of artist Donald Judd’s well-known 1975 National Gallery of Canada catalogue. The project began in 2002, where the artist started to make “decoy” copies of the original book that he would than sell in bookstores. These drawings, an extend to this project, proposes hypothetical book covers with slight changes in the title. Also included in the exhibition will be a parallel series of drawings on gessoed board of mirror-like patterned surfaces. The Mirrors are drawings that attempt to represent standard everyday 18 x 24″ bathroom mirrors, the type found in institutional toilets or that landlords install in rental apartments. The drawings are attempts to capture the reflective surface in these everyday objects, however they inevitably become more about pattern and surface.

Derek Sullivan (b. 1976, Richmond Hill, Ontario) received his BFA from York University in Toronto and his MFA from the University of Guelph. Solo exhibitions include The Booklover at the Dunlop Art Gallery (Regina), Albatross Omnibus at The Power Plant (Toronto), The Missing Novella at the Oakville Galleries (Oakville), Bulletin Board at Whitecolumns (New York) and More Young Americans at Kiosk (Ghent, Belgium). Sullivan has been featured in numerous group exhibitions, including BNL MTL 2012 (Montreal), Where do I end and you begin at City Art Centre (Edimburgh) and Blue times at Kunsthalle Wien (Vienna). His books and editions have been published by Paul & Wendy Projects (Toronto), Art Metropole (Toronto), Boabooks (Geneva), Printed Matter Inc. (New York). Sullivan has been nominated five times for the prestigious Sobey Art Award, being shortlisted in 2012. His works in the collection of the National Gallery of Canada are currently on view in their upcoming survey exhibition Our Masterpieces, Our Stories. Derek Sullivan lives and works in Toronto.