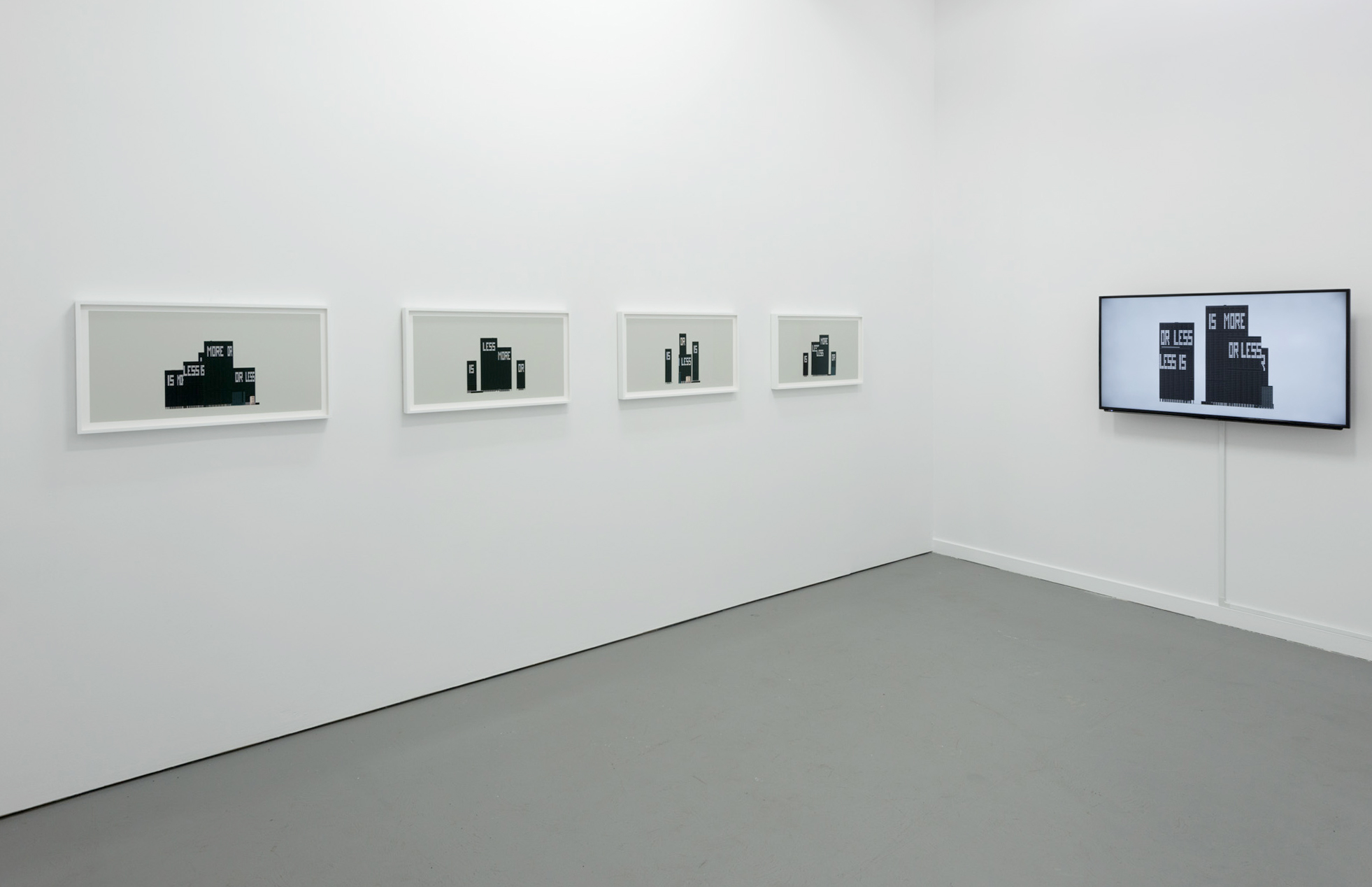 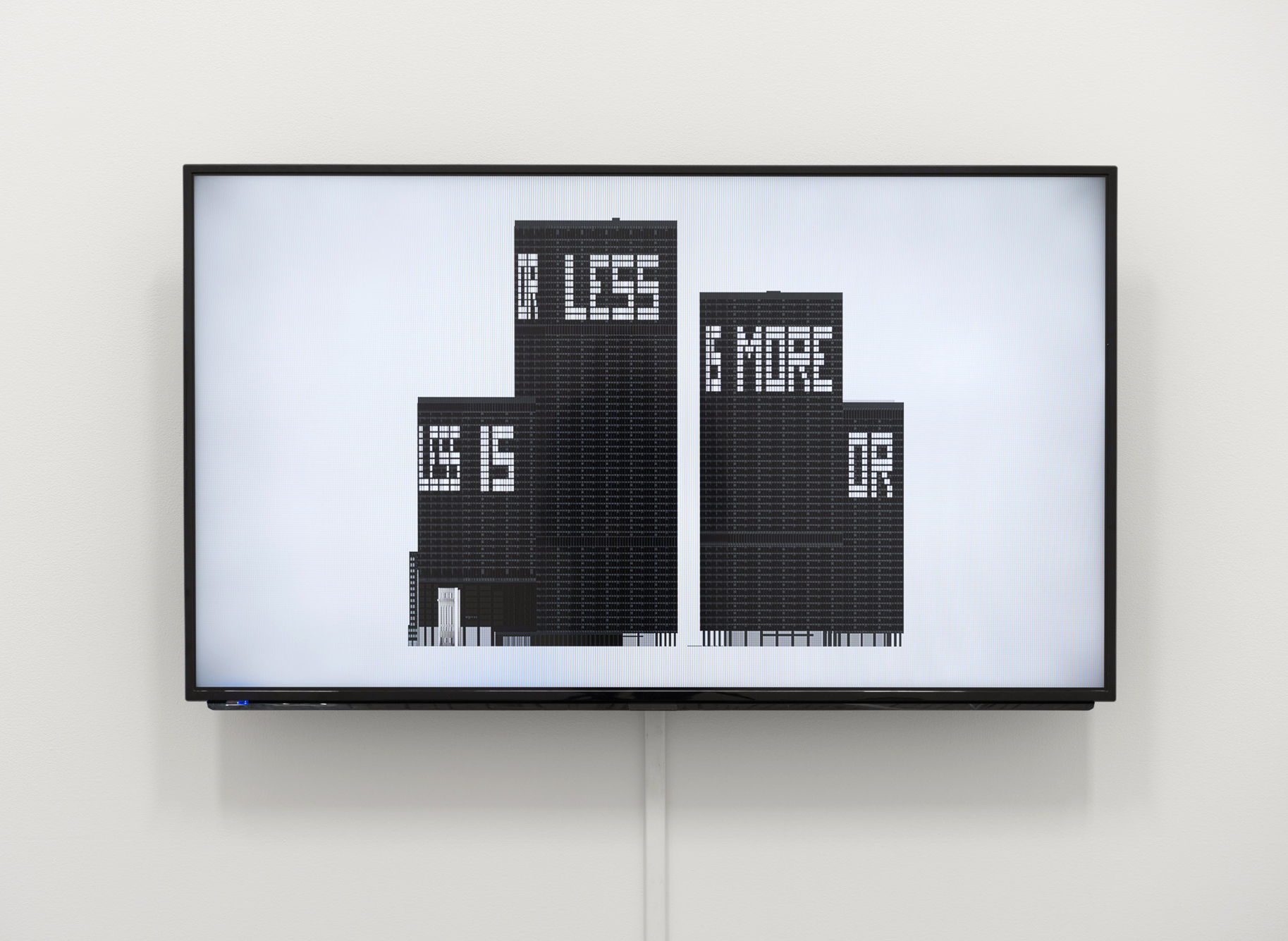 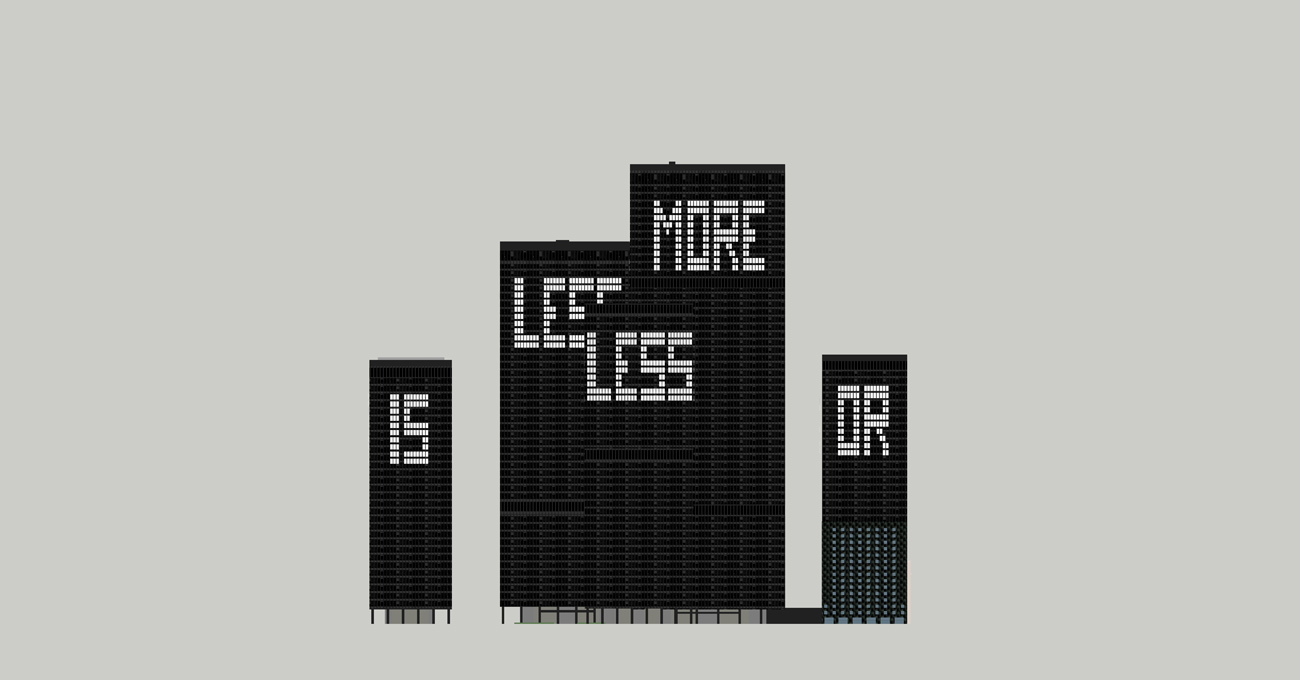 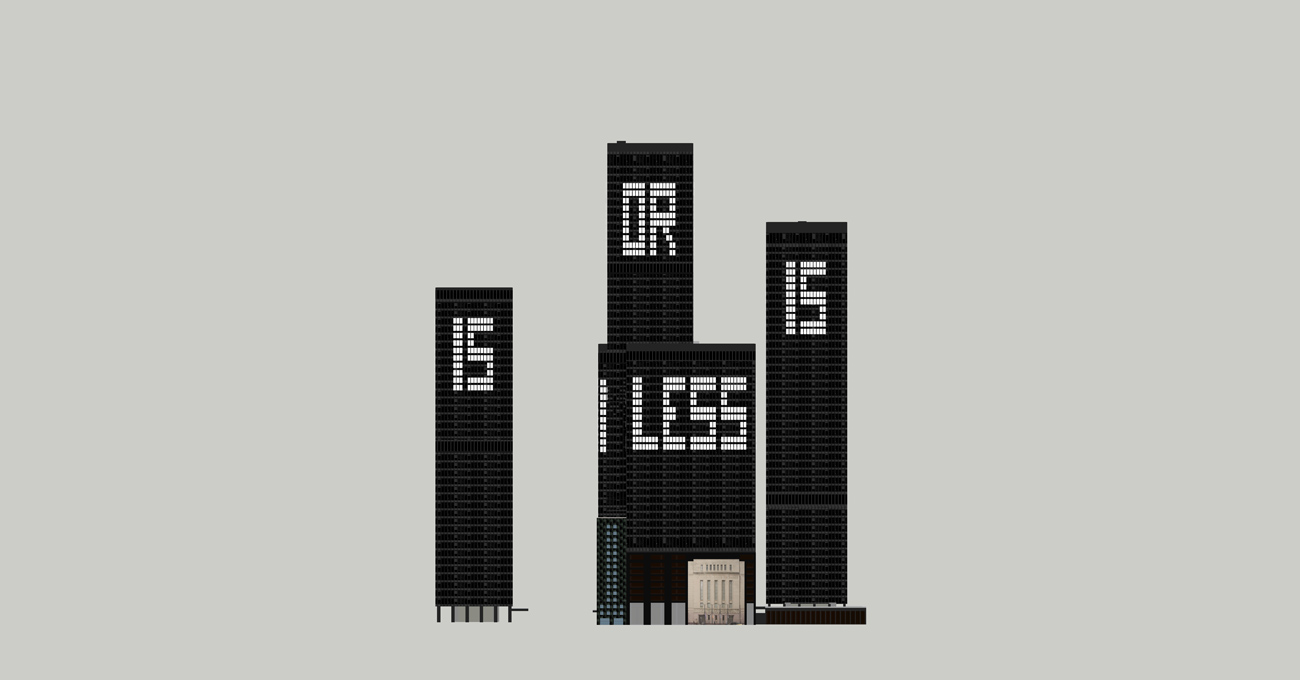 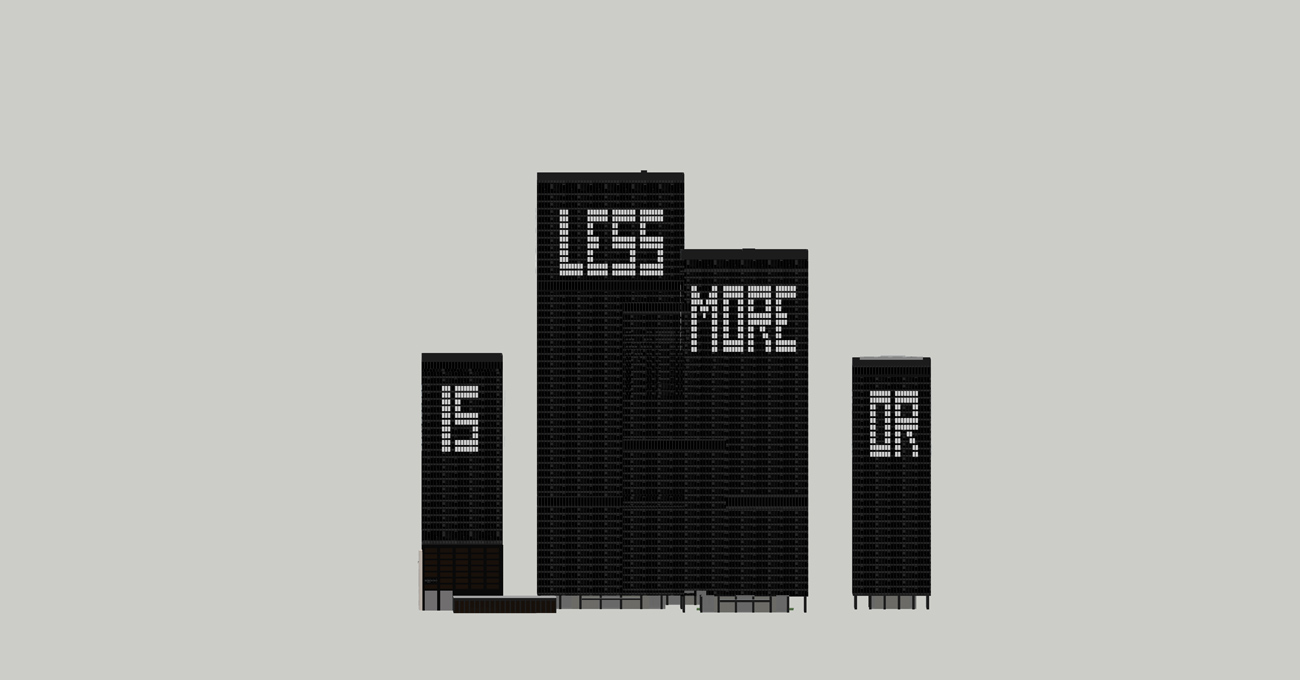 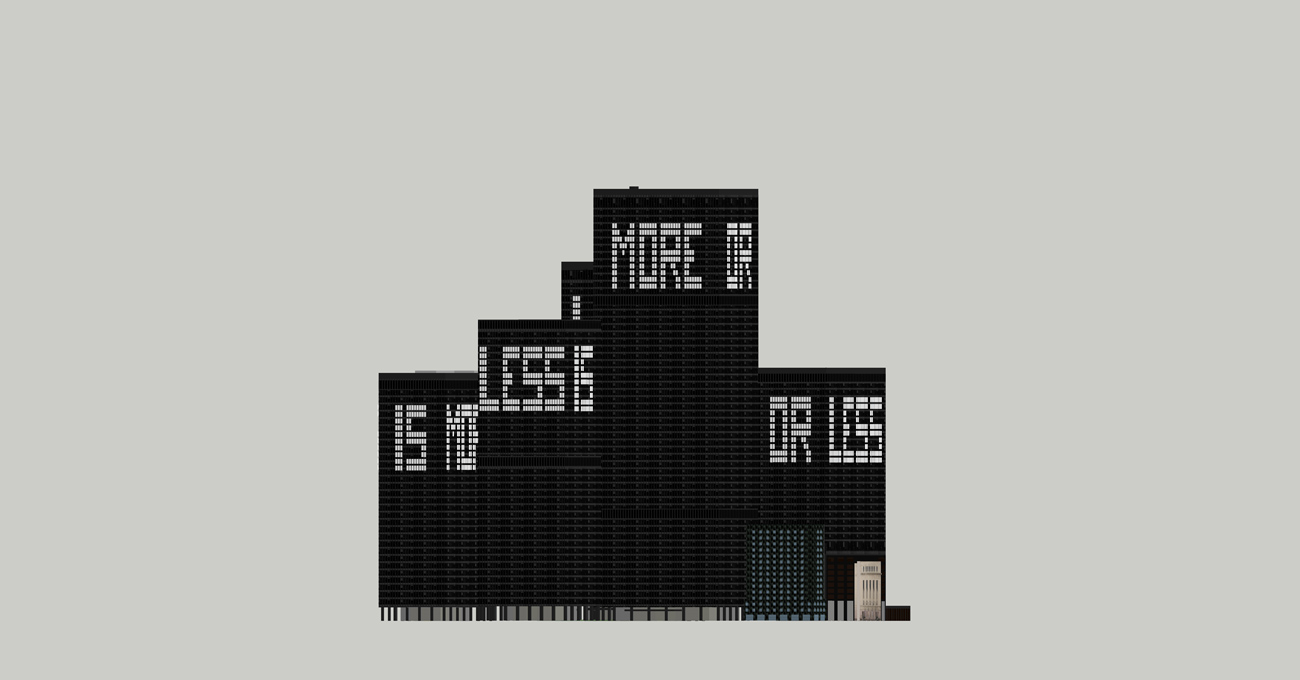 Aude Moreau’s major ongoing project Less is more or will be presented in the second room. This project is part of the intervention projects the artist has been carrying out on the façades of skyscrapers in North American metropolises. Several of her site-specific interventions have notably taken place in Montreal, Los Angeles and Manhattan (in progress). The common thread of these projects is that they occupy the interior, the heart of buildings by controlling the light they emit on the city; thereby reflecting the geographic and historical reality of the city.

The intervention project in Toronto seeks to actually inscribe the words Less is more or on five of the Toronto Dominion Centre towers. This architectural complex, the construction of which began in 1963, was designed by Mies van der Rohe. The emblematic architecture of the city’s architectural and cultural heritage is the legacy of Mies van der Rohe’s wish to go to the essence of the form by working the structure of the building, its skeletal frame, as close as possible and by eliminating any reference to ornamentation. The artist’s choice to revisit the place and Mies van der Rohe’s words stems from the necessity to reconsider our approach before the concepts of openness and transparency as an emancipatory value inherited from modernity. In adding or to complete the sentence on the four façades of each of the buildings, the statement: less is more… grows weaker and thus testifies to our era in which all opinions are equal in the contingency of a multiplicity of viewpoints.

Aude Moreau works and lives in Montreal, she graduated in 1992 from Université Paris VIII in visual arts before settling in Quebec in order to pursue her studies in scenography in 1995. Since the 2000’s, she has developed a body of work combining her skills in both scenography and visual arts. Recipient of numerous grants, she has presented her work in events such as the Prague Biennale and the Nuit Blanche of Montreal. Aude Moreau has participated in several exhibitions in different locations including the Fonderie Darling, the Musée d’art contemporain de Montréal, in France, in the United States, and in Luxembourg. Her work is part of numerous public and private collections.